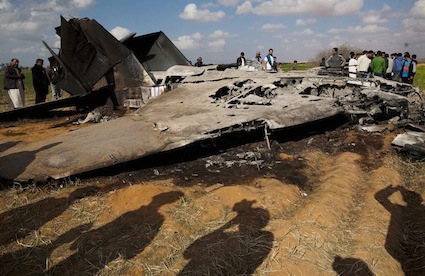 Libyans inspect the wreckage of a US F15 fighter jet after it crashed in an open field in the village of Bu Mariem, east of Benghazi, eastern Libya, Tuesday, March 22, 2011, with both crew ejecting safely. The U.S. Africa Command said both crew members were safe after what was believed to be a mechanical failure of the Air Force F-15. The aircraft, based out of Royal Air Force Lakenheath, England, was flying out of Italy’s Aviano Air Base in support of Operation Odyssey Dawn.(AP Photo/Anja Niedringhaus)

After the rescue of a pilot and the weapons systems officer in Operation Odyssey Dawn, the military is keeping the names of the two crew members under wraps.

The initial press release about the crash of a U.S. Air Force F-15 in eastern Libya said both members of the air crew ejected from the jet before it crashed. Later reports said they suffered minor injuries in the ejection.

The press release also made clear that “the identities will be released after the next of kin have been notified.”
But after repeated requests from CNN for details about their identities and whereabouts, Maj. Beverly Mock, a spokesperson for the Joint Task Force Odyssey Dawn, wrote in an email: “We will not release the names of the aircrew. I realize initially it was said they would be released but because they are being reintegrated and will return to their unit we will not release their names for their safety and privacy.”