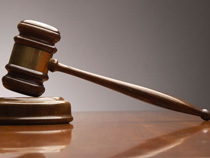 Pretrial hearings for Khalid Shaikh Mohammed and four other alleged top Al Qaeda terrorist operatives opened Monday with a ruling that the defendants cannot be forced to attend the legal proceedings at the U.S. naval base at Guantanamo Bay, Cuba.

The decision by Judge James L. Pohl came after Mohammed and his codefendants sat quietly and respectfully during the opening day of testimony at Guantanamo, sharply different from their courtroom protests during their arraignment last spring.

In May, the defendants — who face the death penalty for their alleged involvement in the Sept. 11 attacks — sought to disrupt the proceedings. One detainee was restrained, several refused to listen to Arabic translations on headphones and some outright ignored the judge. Two abruptly stood to pray.

But on Monday, all of them remained silent, led by Mohammed. He wore traditional white robes and turban, his long, thick beard dyed red. His four “brothers” sat silently behind him next to their own legal defense teams.