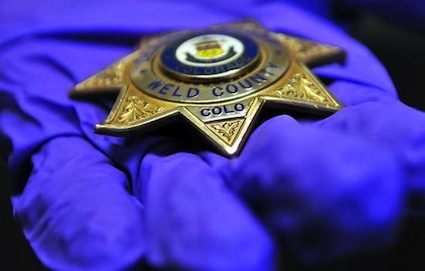 It’s still shiny, Sam Brownlee’s badge, now in the Evidence Room at the Greeley Police Department. The only mark on the badge is a small bend on one of the six points of the star. You have to look close to find it.

It was one of the largest funerals in Greeley history. Exactly one week after Brownlee died, more than 2,000 police officers attended the funeral from across the United States and even from Canada and Mexico. The lines of flashing patrol car lights stretched for miles.

This week, the Greeley police and the Weld District Attorney’s Office finished the investigation and released the results on Tuesday. It told the story of the chase, of stopping Reyes’ car, of four officers struggling with Reyes before he grabbed Brownlee’s gun from his holster and shot the deputy three times.

One bullet hit Brownlee’s right hand. Another lodged in his bullet-proof vest.

But the third bullet killed him.

According to the report, the bullet hit Brownlee’s badge, then ricocheted into the vest. Because of the angle of the bullet after it hit the badge, it didn’t lodge in the vest like it was supposed to.

Lawrence crime data analysis shows burglars no more likely to strike during holidays than any other time of year.