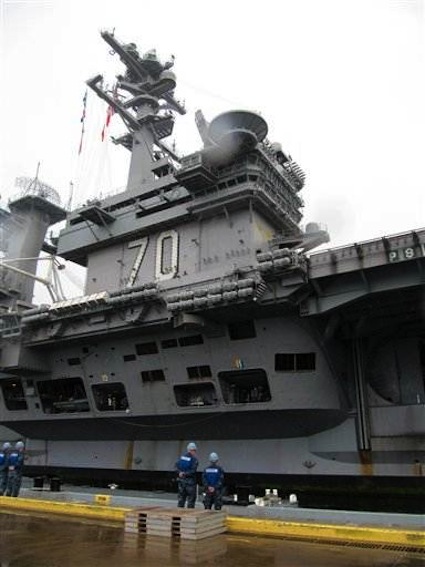 The USS Carl Vinson pulls into Pearl Harbor, Hawaii on Tuesday, making its first stop on U.S. soil since burying Osama bin Laden at sea last month. The massive carrier and its 5,500 sailors, pilots and crew were returning home from their deployment to the Middle East and Asia that began Nov. 30. It spent 171 of 191 days at sea and sailed more than 52,340 nautical miles. Image: Audrey Mcavoy / AP

More than 100 supporters greeted the USS Carl Vinson as it returned from a deployment that became historic last month when the aircraft carrier picked up a team of Navy SEALs carrying the body of Osama bin Laden and buried the terror leader at sea.

The ship arrived in Hawaii on Tuesday, making its first stop on U.S. soil since its six-month deployment to waters in and around the Middle East and the Western Pacific. The Vinson is making a three-day stop in Pearl Harbor before heading home to San Diego — where it is expected to be met with a much larger greeting.