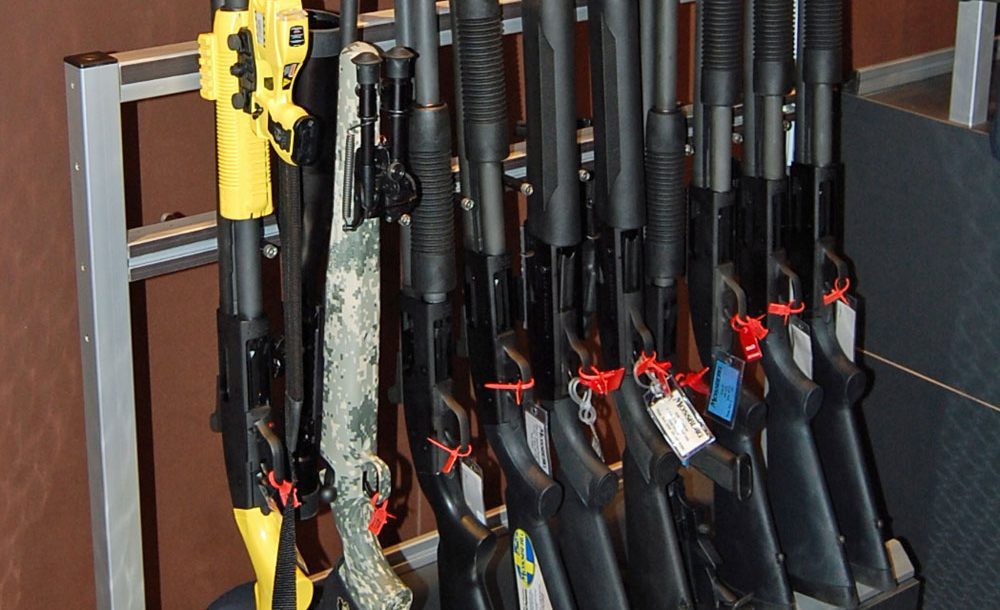 Mossberg
I am intimately familiar with the excellent Mossberg 590 family of shotguns.  With everything from: pistol grips, standard stock, adjustable, speed feed (holding two spare shot-shells in either side of the stock), these excellent shotguns are available in ghost ring as well as bead sights.  I got to shoot the M590A1 with adjustable stock quite a bit last year.  I liked the pistol grip adjustable stock which is great for tactical work but the rear receiver mounted ambidextrous safety is hard to manipulate quickly.  I asked if Mossberg is willing to modify the safety to a crossbolt (looks like they’ve done so with the X12 LLS for use with the Taser) so let’s hope.  The most interesting shotguns coming out are the 500 Road Blocker and 930 Road Blocker with the massive muzzle break affixed.  The muzzle break reminds one of a science fiction weapon instead of a LE or military shotgun.  I’ll have to put some rounds down range to see if it really helps control recoil.  Lastly the X12 Less Lethal System designed in conjunction with Taser for their XREP (Extended Range Electronic Projectile) round is final stages of development with an early 2009 release date.  Prototypes I shot were spot on with final improvements being made now.  We’re hoping to T&E the final version soon. www.mossberg.com 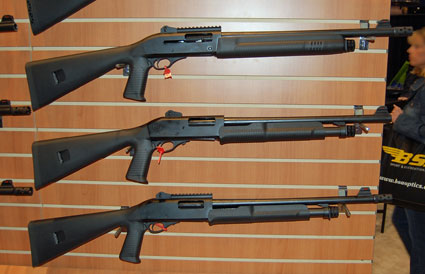 Charles Daly
Go to be honest, I don’t know much about this shotgun manufacturer but from the looks of their display booth, they intend to make a dent on the self-defense and police shotgun market.  With pump shotguns and autoloaders with all the right accouterments CD’s shotguns looks to make a serious impact.  With a lifetime repair policy that guarantees free repair of any factory defective shotgun and a low price point, sales may be brisk.  www.charlesdaly.com 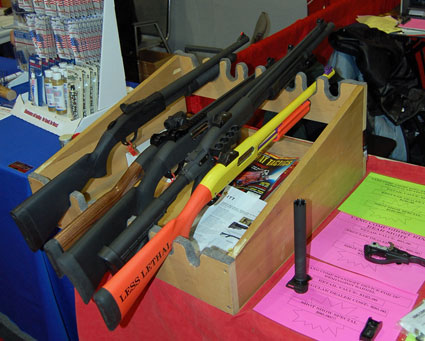 Vang Comp Systems
I’ve heard over the years the positive effects of the Vang Comp System on accuracy and controllability.  According to the company the barrels are reworked with the forcing cone lengthened, a back-boring of the barrel and compensating ports added.  The result is a substantially smaller shot pattern even out to extended ranges and less felt recoil.  You can purchase a shotgun with the Vang Comp modifications and a few more accessories or you can have the modifications made to your shotgun barrel. www.vangcomp.com

Safety Harbor Firearms Inc.
When the Miami Vice TV show ran in prime-time from ’85 to 1989, I was a fan.  With a couple years of LE under my belt as well as a gun enthusiast, I liked the director’s (Michael Mann) emphasis on weaponry.  Ricardo Tubbs (Philip Michael Thomas) primary weapon was a cut-down 12 gauge that he carried under his jacket on a sling.  Although I’ve shot several different shot barreled pump guns over the years, I’ve never fired on as small as the Tubbs character.  Safety Harbor Firearms is now selling cut-down versions of the Remington 870.  Called the KEG 12 (short for Kompact Entry Gun) these scatterguns are available in either 7-½ or 10-inch barrels.  The 10 inch version has a capacity of four – 2 ¾ or 3” shells.  With a folding vertical forearm to increase control, the KEG 12 seems like it would be fun to shoot and a serious amount of firepower in a small package.

Yes, the “black rifle” has made a dent in shotgun sales for home defense, police and the military but you can buy a lot of 12 gauge low brass for a lot of practice to train with versus 5.56 ammo nowadays.  Certainly a charge of 00 buck or a rifled slug can “have an impact” on a bad guy with evil intent.  No, shotguns aren’t going anywhere and today’s manufacturers are listening to consumers and operators in the field as to what accessories and options they want as well. www.safetyharborfirearms.com. 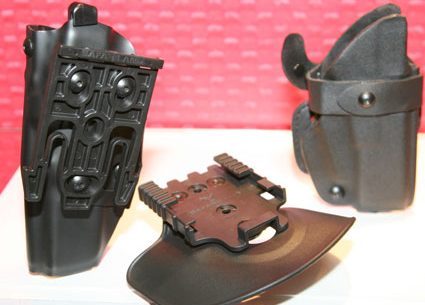 Mossberg I am intimately familiar with the excellent Mossberg 590 family of shotguns.  With…