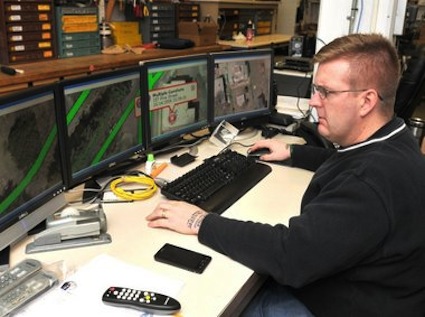 Springfield police officer Sean Sullivan zooms his computer on a location that triggered the ShotSpotter system. Sullivan is in charge of technical services for the department. The Republican photo by Mark M. Murray.

In the little more than two years that the Police Department has employed ShotSpotter acoustic technology to detect gunfire, the system has alerted police to more than 4,100 instances where a weapon has been fired.

Since its installation in July 2008, ShotSpotter has detected 4,158 gunshots, and contributed to 25 arrests and the seizure of 23 illegal firearms. In three instances it has alerted police to what would turn out to be homicides before the Police Department received a single 911 call.

All of this occurred in the roughly three of the city’s 32 square miles, the area covered by the ShotSpotter system.

“We’re getting spoiled by those three square miles,” said Sgt. John M. Delaney, aide to Police Commissioner William J. Fitchet. “Cops are getting used to it. It is something officers rely on.”

ShotSpotter, installed at a cost of $450,000, is designed to locate the scene of gunfire through a process called “acoustic triangulation.”

Source: Patrick Johnson for The Republican.