EXETER, NH (April 28, 2009) SIG SAUER, Inc. announced today that it has secured a multi-year contract to provide pistols to the U.S. Army’s Material Command.   The potential value for all quantities and the related customer support package is $306 million.  The initial order of 55,890 units is to be released as the standard sidearm for the entire Colombian National Police force.  Shipments are to begin immediately with a second release of 42,000 pistols to follow.

Ron Cohen, President and CEO, stated that he is proud that SIG SAUER’s long standing reputation for superior reliability and quality has been recognized with this exceptional contract.  Moreover, it provides an opportunity for SIG SAUER to continue to expand its manufacturing facilities and create U.S. jobs at a time when other companies are downsizing and exporting jobs overseas. Mr. Cohen further stated that the breadth of SIG customers is evidence of the worldwide acceptance and demand for SIG SAUER products. These customers include numerous elite law enforcement, military, and government agencies (e.g. the U.S. Department of Homeland Security, U.S. Secret Service, Navy Criminal Investigation Service (NCIS), U.S. Navy SEALs, U.S. Air Force OSI, British SAS, French National Police, and the Colombian National Police).

Employing over 350 skilled workers at its Exeter, NH facility, the company has been on a continuous program of expansion and growth.  State-of-the-art automated machines now populate the majority of the facility, the result of over $30 million dollars invested over the past four years. 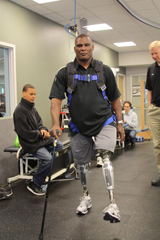