SPRINGFIELD, Mass.– Smith & Wesson Corp., announced today that it has received top awards in two categories from the Shooting Industry Academy of Excellence.   Smith & Wesson was named the “Manufacturer of the Year” and also received the “Rifle of the Year” award for the company’s M&P15 MOE (Magpul Original Equipment) tactical rifle.

Established in 1992, the Academy of Excellence is sponsored by FMG Publications, publisher of Shooting Industry, GUNS and American Handgunner magazines. The voting group consists of 500 industry executives, gun dealers and outdoor writers. Smith & Wesson was nominated for “Manufacturer of the Year” for the company’s expansion of new product lines including the introduction of the Night Guard™ revolver series, the Pro series of pistols and revolvers, and new introductions in the Military and Police (M&P) Pistol and Tactical Rifle Series. Smith & Wesson was also noted for its continued support of the firearms industry and shooting sports at the highest levels, including its work with the National Shooting Sports Foundation (NSSF), National Rifle Association (NRA) and USA Shooting Teams.  The company was also noted for playing an instrumental role in the NRA’s Insure Your Gun Rights program by promoting industry wide participation. Smith & Wesson was also acknowledged for driving business at the dealer level through incentive based programs and for the company’s commitment to excellence in service and training.

Smith & Wesson also received the Shooting Industry’s “Rifle of the Year” award for its M&P15 MOE rifle. First introduced at the SHOT Show in February 2009, the M&P15 MOE expanded the company’s popular line of Military & Police Series Rifles, which now includes 16 different configurations. Based upon a combat-proven design, the M&P15 MOE incorporates Magpul’s innovative MOE gear while delivering the accuracy and dependability that shooters have come to expect from Smith & Wesson. The rugged, lightweight, semi-automatic rifle chambered for 5.56 NATO (.223) ammunition, features an upper and lower receiver constructed with a tough 7075 T6 aluminum. Reliability features of the gas-operated rifles include a chrome-lined gas key, bolt carrier and barrel. The new rifle is standard with several Magpul features including a MOE stock on a six position receiver extension tube, a MOE grip designed to enhance ergonomics while providing a positive anti-slip texture and a MOE handguard for improved firearm control.  The MOE handguard also offers a modular platform, allowing users to add accessory items such as lights or lasers. In addition, the M&P15 MOE is standard with Magpul’s new MBUS rear folding sight along with a 30-round P-Mag. The rifle is offered with either black MOE gear or flat dark earth MOE gear.

Michael F. Golden, President and CEO of Smith & Wesson Holding Corporation was on hand to receive the awards and commented, “On behalf of all of our employees, we are honored to accept these two awards granted by not only our customer base but by our peers within the industry. We take great pride in this recognition.  We work continually to support the shooting sports through a variety of joint partnerships and through the development of new and innovative products, such as the M&P15 rifle, which was first introduced only four years ago.  Smith & Wesson will remain dedicated to supporting our industry’s advancements and to developing the best products and services available on the market.” 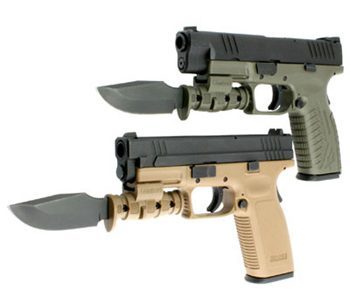