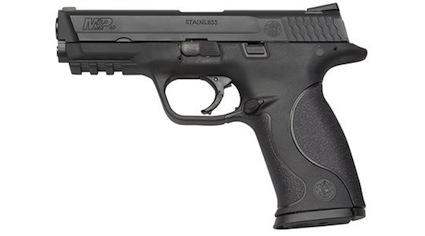 Austin Police Department
After making the decision to switch over to a standardized departmental side arm, the Austin Police Department began actively taking submissions from a number of manufacturers in the firearm industry. Once the test and evaluation period had concluded, the agency selected the Smith & Wesson M&P40 polymer pistol as the new standard agency side arm.

As part of the full department conversion, the Austin Police Department ordered 1,775 M&P pistols chambered in .40 S&W. The new side arms are manufactured with standard features, which include three interchangeable grips sizes, ambidextrous controls, and the ability to disassemble the firearm without pulling the trigger. In addition, the M&P40 pistols have been equipped with night sights and three magazines as requested by the department.

“This decision by the Austin Police Department marks the first time in 20 years that the agency has chosen to issue a standard firearm to its officers,” said Mario Pasantes, Senior Vice President of Marketing and Global Professional Sales. “Prior to this, officers within the department were able to select from an approved-for-carry list of firearms that included a variety of choices from multiple manufacturers. We view the department’s selection of our M&P40 as an endorsement of the winning attributes of the pistol. The Austin Police Department now joins hundreds of other agencies that have selected the M&P for use in the line of duty.”

Pasantes said, “Throughout our Company’s history, Smith & Wesson has focused its attention on meeting the high performance standards and specialized needs of military and law enforcement professionals. Our law enforcement support services are structured so that departments can hand pick those elements that directly meet the needs and qualifications of their particular agency. As a result, within the San Antonio Police Officers Association, officers were able to customize the M&P15A rifles to meet their personal preferences, while still conforming to the list of standard specifications required by the agency.”