The war against terror brings with it the need to cope with collapsed buildings in search of victims trapped below the rubble, or soldiers who got buried while pursuing the enemy. Since the danger of unexploded munitions, the presence of chemical or biological agents, or enemy snipers cannot be discounted, there is always tension between rushing to the scene to offer quick help and protecting rescue units against incurring even more casualties. Robots offer one way of solving this dilemma — and we have written several stories about work done to develop search-and-rescue robots. The big problem with robots is that they find it difficult to walk, maintain their balance, and perform their mission on a rugged, uneven surface. Sending a robot to survey the rubble of a destroyed building is thus an ambitious proposition from the engineering point of view.

Norwegian researchers, though, came up with a brilliant idea: How about a snake-like robot? A snake-like robot would replicate a trick of real snakes, pushing off obstacles it encounters to move forward, and gliding over unmovable objects. If you place small cameras, sensors, and communication gear on it — or inside it — it could slither over, under, and around rubble to look for survivors, chemical and biological agents, unexploded ordnance, and more, reporting back to search and rescue units in real time. The scientists have developed a virtual double of the robot that accurately predicts its real life behavior, something not achieved for a realistic snake robot before. Researchers have been working on snake-inspired robots for decades, but they usually have wheels or treads on their body to help them move. These make it easier for a snake robot to slither forward, by converting its writhing motion into a forward slide — but that approach works best on smooth surfaces. “In a collapsed building where there’s a lot of rubble, for example after an earthquake, a wheeled snake would probably get stuck,” says Aksel Transeth of Norwegian research organization SINTEF in Trondheim.

A more versatile snake robot would move in a truly snaky way, pushing off of obstacles, such as rocks, which it encounters, Transeth argues. Along with colleagues at the Norwegian University of Science and Technology, also in Trondheim, he developed a wheelless snake robot that can do just that. Named Aiko, its 1.5 meter-long body is made from segments of PVC tube, with motors to bend its joints. “It initially couldn’t move at all,” Transeth says. They placed objects around Aiko, and it was able to push off them to zoom along at 15 centimeters per second. A virtual double of the robot that accurately models Aiko’s real-life behavior will be used to guide development of the real slithering robot. Other wheelless snake robots have tried to make use of obstacles, but Aiko is the first to have an accurate simulated double as well, Transeth says. The team hopes that the simulation will let them improve Aiko more quickly, helping to reveal the forces needed for it to move most effectively. “It’s much easier to simulate on the computer than to build a snake robot and do an experiment,” Transeth says.

Building an accurate model of the robot’s movements is tricky. At any one time, different parts of Aiko can interact with the ground or obstacles in a variety of ways, for example one segment may be sliding while another grips onto a rock, says Christoph Glocker of the Swiss Federal Institute of Technology in Zurich. Glocker, co-author of a new study on Aiko, helped the capture these movements mathematically in an exact way, which earlier models could not do. The new model “makes the algorithms [governing the robot’s movement] much more robust, reliable, shorter and sharper,” Glocker says. There were few systematic studies of how snake robots move among objects, so this study makes a significant contribution to understanding the principles behind that, says Shigeo Hiroseof the Tokyo Institute of Technology in Japan. He points out, though, that there is more to do if Aiko is to truly make use of obstacles, for example placing tactile sensors on its body to sense objects would help. Transeth agrees, he says the team is currently working on this problem with the help of the virtual Aiko. 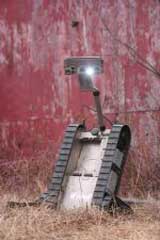