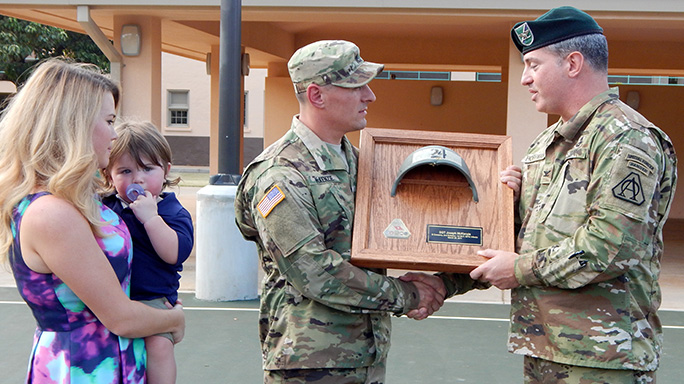 A bullet fired by a Taliban fighter in Afghanistan missed hitting Staff Sgt. Joseph McKenzie in the head by about a quarter of an inch. Instead, his Advanced Combat Helmet, or ACH, took the brunt of the impact. After he got fixed up by the medic for superficial wounds, he pressed on for another 12 hours of fighting.

On Oct. 27, Program Executive Office, or PEO, Soldier returned that helmet to McKenzie during a short ceremony at Schofield Barracks, Hawaii.

It was March 29, 2011, when McKenzie got shot. Back then, he was assigned to the “No Slack” 2nd Battalion, 327th Infantry Regiment. The unit was involved in a firefight in Afghanistan’s Ganjgal Valley.

“We air assaulted on to the top of a mountain, a helicopter landing zone, and we were basically setting up a blocking position,” McKenzie said. “My platoon was on one peak, and then another platoon on another peak. We were holding these peaks, and these blocking positions while another platoon pushed through the middle of the valley, and pushed out all the Taliban that were in the middle of the valley.”

McKenzie said once they had set up their defensive position, they started taking on enemy fire. After that enemy fire died down some, he said he got out of his defensive position. He had stooped to pick up some machine gun lubricant – and that’s when he got shot.

“A bullet hit me right where the night vision goggles mount in on the helmet,” McKenzie said. “My helmet slammed right into my face, and I went black for a second. I thought someone had just punched me in the eye. My buddy yelled for me to jump back behind the sandbags. He told me I had been hit in the head, but at first I thought he was joking. Then, after I got under cover, I took the helmet off and could see where the bullet struck the helmet.”

McKenzie said the medic patched him up, but that the blood on his face made his injury look worse than it was. “Your face is pretty vascular,” he said. “A little nick and it will bleed a lot.”

He does have a scar, under his eye, and on his shoulder, he said, from where the fragments from the bullet bounced off his helmet. The helmet fared much worse. “Down by the lip you’ll see the entry wound, and then basically like the other portion is kind of blown out where the bullet actually hit and stuck,” he said.

The entry point on the helmet, he said, is “about a quarter of an inch from the edge of the helmet – or less.”

Afterward, he put his helmet back on and got back into the fight. When he was able, he was evacuated to Bagram Airfield, and then a short time after that, he said, he was back at his combat outpost and back out on patrol.

Some Soldiers might have looked at the bullet lodged in their helmet and discovered a new-found respect for the gear the Army issues. Getting shot didn’t change McKenzie’s opinion of Army gear, though – it reinforced it. McKenzie said he was already a believer in Army protective equipment, even before he got shot.

“If the equipment wasn’t good equipment, they wouldn’t let us be taking it out into combat,” McKenzie said. “If it wasn’t tested before and gone through the rigors of whatever they put it through, there would be no point for me to wear it. It’d be unproven gear. That’s why in the Army you don’t just get to wear what you want, because it’s not proven.”

Col. Dean M. Hoffman, project manager for Soldier protection and individual equipment, part of PEO Soldier, returned the helmet to McKenzie during a ceremony in Hawaii. With the helmet that saved his life back in his hands, McKenzie said he plans to “mount it on my I-love-me wall.” He also said he plans on doing 20 years in the Army “depending on how long my body holds up.”

When protective equipment like an ACH or an Enhanced Small Arms Protective Insert fulfills its role in combat – by getting shot at – PEO Soldier brings it back to the United States to evaluate how that gear performed.

“The big thing is, we want to make sure that the equipment performed as it has been tested,” Hoffman said.

“We are analyzing and trying to determine what the threat was that hit it, did the threat act any different than what we have actually seen doing our tests, and did the helmet perform in accordance with what we’ve tested it to,” Hoffman said. “It’s a deep-dive analysis to make sure that we are maintaining that our equipment is No. 1 in the world, that we are giving our Soldiers the most up-to-date in protective equipment that technology provides today.”

Hoffman said that before PEO Soldier returned McKenzie’s helmet, they ran tests on it to see how it stood up to the round it took, and to also get a better picture of the types of threats that Soldiers are exposed to in combat and if Army protective equipment has been evaluated against those types of threats.

Regarding McKenzie’s ACH, Hoffman said, “Just a quarter inch and he would have gotten it right between the eyes. But when you look inside the helmet – nothing is coming through.” 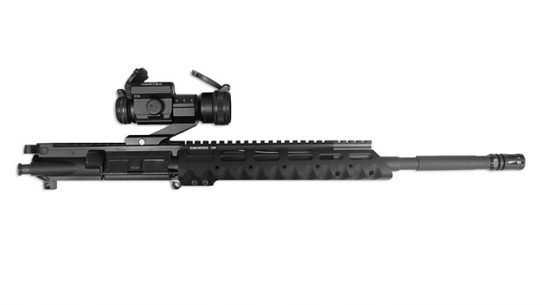