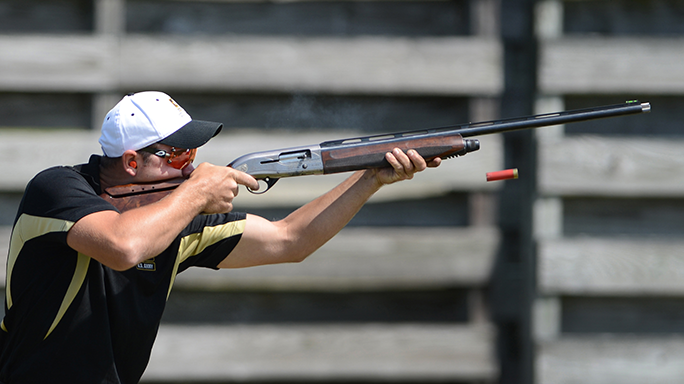 Spc. Dustin Taylor, a member of the Army Skeet Team, shoots during the 2015 Armed Forces Skeet Championship. The five-day competition was held May 11-15, 2015, in Charles City, Va.
(Photo by Marvin Lynchard)
Comment(s)

The following is a release from Shannon Collins of DoD News:

CHARLES CITY, Va. (May 19, 2015) — Army Spc. Dustan Taylor shot the highest overall individual score to win the High Over All, or HOA, award during the 55th Annual Armed Services Skeet Championships, May 11-15.

Navy took the team award, though, after each five-member team competed in 12-gauge, 20-gauge, 28-gauge and 410-bore shotgun events, as well as doubles.

Taylor, a U.S. Army Marksman Unit shooter and instructor from Fort Benning, Georgia, has been shooting for nine years. He said he enjoys shooting with the Service members and veterans at the annual event hosted by the Armed Forces Skeet Association.

“It’s amazing, hearing their stories, just the way the Army used to be and the way it is now, or the Marines or Navy or Air Force, whichever the case it may be,” said Taylor, who will be trying out for the Olympics in October. “My coach, the one who helped me to become a AAA shooter [highest class for skeet], he had 20 years in the Air Force, and he really helped me out along the way.”

Throughout the week, each team shot at clay targets, weighing about two or three ounces and measuring about five and a quarter inches in diameter. Exiting from a high house and low house, the clay pigeons flew between 42 and 46 miles per hour.

The teams shot at 100 targets per shooter or 500 per team for a total of 2,500 clay pigeons for the competition, said retired Marine Col. Chris Naler, president of the Armed Forces Skeet Association.

The team that shoots the highest number of targets cumulatively wins annual ownership of the large traveling trophy that has each service branch’s emblem on it. Each year, the winning team puts its plate on the trophy with its team and their score. Individuals also win medallions and other prizes.

While it is nice to have bragging rights, said Naler, who shot for the Marine skeet team from 2006 to 2014, he explained that many Service members come more for the camaraderie.

“We enjoy ribbing each other with regard to our respective services, but in the end, we’re representing all those who have served honorably,” Naler said. “It’s just a fabulous experience, seeing generations of military. We have Korean War veterans, Vietnam Era vets, several veterans from the current conflicts in Iraq and Afghanistan. There’s one squad here of retired shooters, who’ve been shooting together at this event for 31 years; that shows you the kind of bond that comes when you serve in uniform.”

Skeet shooting can improve marksmanship experience because the shooter is aiming at moving targets, Naler said. The competitors said the sport could have real-world applications.

“Competitions like this are important because marksmanship has gradually declined from World War II to where it’s not really measured in the number of rounds we fire to take out an insurgent or individual. It’s measured in the tonnage of ammunition that we have to use,” Taylor said. “More emphasis on marksmanship would really bring up the effectiveness of a small team as opposed to having to use a bigger force or suppressive fire.”

“We’re taught that every Marine is a rifleman, but shooting skeet is different,” he said. “We learn the fundamentals in boot camp and every year thereafter, but it’s quite different when you apply those to a moving target with a shotgun versus a stationary target with a rifle. But it just takes time. Each time you step up on the station, you have to be in the moment and focus. It’s been six months, and I’m getting to where I’m pretty confident. I’m going to take that skill back to the rifle and pistol range in the Marine Corps, and it will help considerably.”

Navy Lt. Conor Stephens, an intelligence officer at Naval Air Station Fallon, Nevada, has been shooting for nine years and skeet shooting for six years. He shot his first 100 out of 100 this week. This is his fourth Armed Services Skeet Championship. He said skeet shooting helps him handle stressful situations in his military role.

“I’ve improved shooting under pressure, and I’ve dealt better with stressful situations because of my skeet shooting,” he said. “It has kept me calm and focused. It’s very beneficial.”

Army Capt. Katie Fichtner, an artillery officer from Fort Campbell, Kentucky, encourages Service members and veterans to give skeet shooting a try. She has been shooting for about seven years, and this was her first Armed Services Skeet Championship.

“When I first started, I was very intimidated, and my brother basically dragged me out onto the skeet field,” she said. “Since then, it’s been a wonderful experience.

“You can start anywhere at any age. I’ve met some gentlemen out here who just started shooting three years ago, and they are about 65 years old. You can start at any age and at any ability. There are so many local gun clubs. Most installations have MWR [Morale, Welfare and Recreation] programs. I encourage anyone to just go out, find a local gun club and get started.” 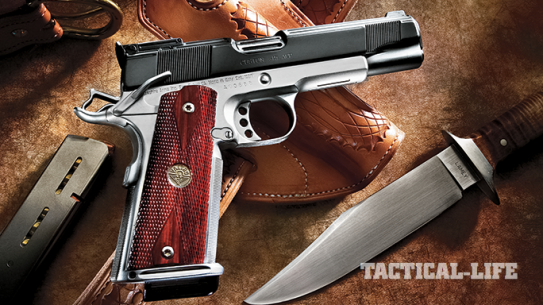 Warhorse Legacy: A History of the 1911 Handgun

From the front lines to the firing line, the 1911 has served and protected...