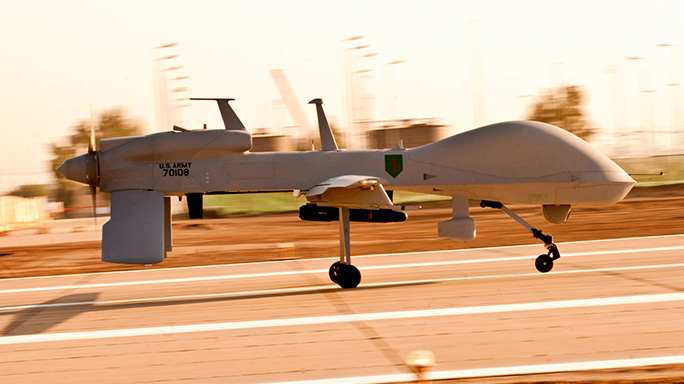 An MQ-1C Gray Eagle unmanned aircraft makes its way down an airfield at Camp Taji, Iraq, before a surveillance mission in the Baghdad area, in this undated file photo.
(Photo by U.lS. Army)
Comment(s)

The testing was conducted by Soldiers of F Company, 227th Aviation, based out of Fort Hood, Texas. It involved the UAS level of Interoperability 3, which means Soldiers can take control of the payload, Eschenbach said. None of the testing, however, involved manned-unmanned teaming, which often involves UASs and Apache helicopters.

Eschenbach and others spoke from Edwards Air Force Base, Calif., during a media roundtable, June 9. Edwards was the site where the Gray Eagles launched to the training area on NTC.

The exercise did not just benefit the Fort Hood Soldiers from a training perspective.

Since OSRVT is a program of record, it needed to undergo what is known as an initial test and evaluation to show the system is robust and reliable, said Col. Courtney Cote, project manager, UAS. That testing was conducted during the training rotation.

To guarantee the results are valid, an independent test organization is conducting the analysis, said Cote, adding that results of the test will likely be forthcoming toward the end of this year.

The OSRVT itself is portable and consists of a radio transceiver, laptop, antennas and software, which allow it to communicate to the UAS, and in turn, receive video and other data, Cote said.

Eschenbach said that the testing was “very demanding,” and the Soldiers from F/227th were pitted against a tough opposing force that’s as close to real combat as training can get.

Another important aspect of the test and the training that took place, Cote said, was that Soldiers did the majority of the maintenance required for the OSRVT and for the Gray Eagle itself.

In the past, the Army was over-reliant on contractors to do that work, he said.

The Army is still in the process of fielding Gray Eagle units, Cote said. By the end of this year, the ninth unit will have been fielded. The end of the fielding to brigade combat teams will occur in 2018, with a total of 15 units having been fielded by that time, Cote said, explaining that one unit consists of 12 Gray Eagles.

The Gray Eagle, OSRVT and other accouterments are on track programmatically, he said.

Regarding the operational testing, Cote said, “we owe it to every Soldier to ensure it does what it’s intended to do and is the very best … this is not the end state. [Rather], it’s another stepping stone on the path.”

“The Gray Eagle is not just about material solutions, it’s also about concepts, doctrine, training and how the Army is organized to integrate this capability,” Eschenbach said. “We’ve made great strides in the last 10 years [when Gray Eagle was first developed], but we’ve got a lot more to go to make unmanned systems on par with manned aviation systems and to get the most out of their capability.” 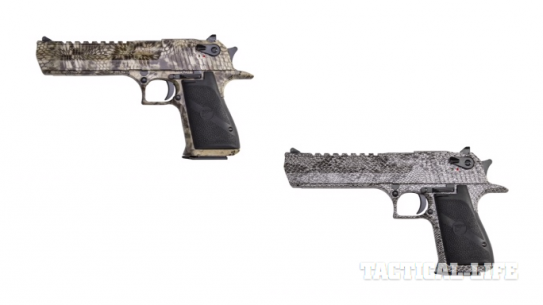 Following the success of its Cheetah animal print, Magnum Research has made its Desert...