Police Lieutenant General Andre Pruis told Parliament’s portfolio committee on police that the police had been working closely with foreign intelligence agencies through the newly established Intelligence Co-ordinating Committee (ICC) and arere prepared for any threat.

He says: “The ICC operates in co-operation with intelligence services from all over the world and provides tactical intelligence, that is flowing on a minute by minute basis”.

“Every bit of tactical intelligence is collected and liaised with intelligence personnel so that action can be taken.”

Pruis says the police’s Special Task Force, the defence force special forces, the bomb squad and the National Intervention Unit will be on standby at games, with the defence force’s Seven Medical Battalion ready to deal “with any possible chemical, biological and radiological threat”.

Public order police, a large number of local and foreign security spotters and private security would work inside the stadiums.

Fighter aircraft would be used to sanitise airspace before, during and after matches, Pruis said, adding that there would be a number of no-fly zones during the tournament.

A database of “dangerous names” would be kept to monitor spectators passing through turnstiles at the stadiums. 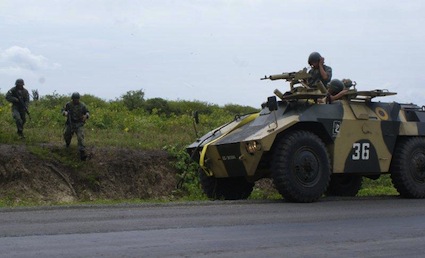