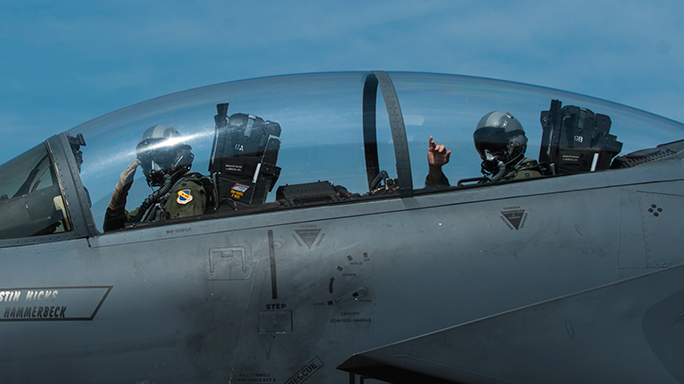 Lt. Col. Paul Hibbard, a 333rd Fighter Squadron instructor pilot, and Capt. Justin Thompson, a 333rd FS pilot, signal their crew chief as they taxi to the runway, July 22, 2015, at Seymour Johnson Air Force Base, N.C. After flying in operational squadrons for most of his career, Hibbard now instructs F-15E Strike Eagle aircrew on the intricacies of operating the aircraft.
(Photo by U.S. Air Force photo/Airman Shawna L. Keyes)
Comment(s)

For F-15E Strike Eagle aircrew at the 4th Fighter Wing, flying through the skies is a part of their lifestyle. However, for Lt. Col. Paul Hibbard, a 333rd Fighter Squadron instructor pilot, the clouds are almost like a second home.

Hibbard surpassed the 3,000-hour mark in the F-15E July 22, joining an elite group of fighter aviators.

“It’s quite an honor,” Hibbard said. “Not many fighter pilots accumulate that many flight hours and experience.”

Hour one began more than two decades ago when he started his career as an F-15E pilot on Feb. 9, 1995, as a student in the first Basic Course held at Seymour Johnson Air Force Base.

“My first couple of hours in the Strike Eagle were exhilarating,” Hibbard said. “What an amazing machine. The simulator and ground briefs prepared us for all of the procedures we would execute, but nothing prepares you for the kick in the pants, the G-forces and the mind-racing visuals of a flight in an F-15E. Over time, I’ve grown accustomed to the physical demands, but the joys of dominating the aerial environment haven’t faded.”

Following initial training, Hibbard explained he had a unique experience to be assigned to four different F-15E operational squadrons.

Hibbard has flown with the 494th FS at Royal Air Force Lakenheath, England; the 389th FS at Mountain Home AFB, Idaho; and the 335th FS at Seymour Johnson AFB. He’s also spent time at the 90th FS at Joint Base Elmendorf-Richardson, Alaska, when F-15Es were assigned there.

“I’ve participated in operations or exercises supporting our national military objectives in over 21 nations throughout four continents,” Hibbard said. “While amazing and rewarding, I wouldn’t call it exceptional. Airmen, Soldiers, Sailors, Marines and (Defense Department) civilians are making the amazing possible every day in places more far-flung than I ever experienced. They are the exceptional ones.”

Hibbard has flown more than 1,550 sorties and deployed seven times throughout his Strike Eagle career. During that time, he learned no one is perfect, including himself.

“I don’t want to be known as the guy with 1,000, 2,000 or 3,000 hours,” Hibbard said. “Credentials don’t mean much to me. Demonstrated performance was always, and remains, my benchmark, and that is only as good as your last sortie.”

Upon landing from the sortie that took him over the mark, Hibbard’s family and friends joined him on the ramp to celebrate his achievement. He said he was especially appreciative that his family was allowed out because they don’t get to participate in a lot of what he does.

“So few Strike Eagle aircrew reach this milestone, and I didn’t get there on my own,” he said. “My wife of 22 years has supported me the whole way (as well as) all the unsung Airmen doing their best to make this milestone possible.”

As an instructor pilot, Hibbard is charged with training new Strike Eagle aviators during the qualification course. Lt. Col. Frederick Haley, the 333rd FS commander, said having someone with Hibbard’s expertise provides an added benefit to those on hour one in the aircraft.

“There are only two other actively flying F-15E pilots who have achieved this rare milestone,” Haley said. “The 333rd Fighter Squadron is fortunate to have an officer of such tremendous talent and rare experience committed to developing the next generation of Strike Eagle warriors.”

Now a member of this elite Strike Eagle club, Hibbard plans to continue passing down his knowledge and expertise to all the younger pilots that come through his classroom.

“I can tell you the 3,000th hour didn’t feel very different from the 2,000th or 1,000th hour, but it feels a lot different from that first hour,” Hibbard said. “I look forward to being able to continue to fly the Strike Eagle for as long as the Air Force will allow me.” 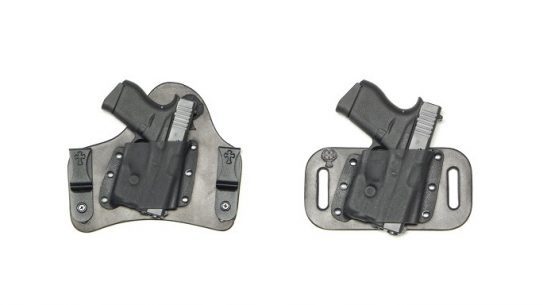 CrossBreed Holsters is offering nearly a dozen brand new models for both the Glock...