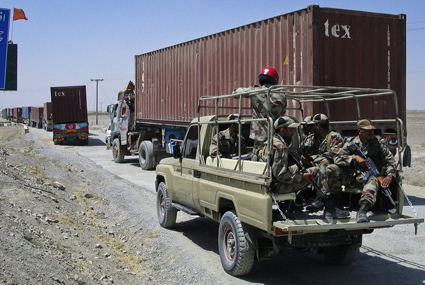 Two suicide bombers penetrated a government compound in the country’s south Sunday, killing five people, Afghan officials said. There were no reports of foreign troops or civilians at the site.

In neighboring Helmand province, a bomb planted at a bus station killed one policeman and wounded another person, a provincial official said.

The suicide attack was in the district of Spin Boldak in Kandahar province in one of the nation’s most violent areas. The district is a major infiltration corridor for Taliban fighters from Pakistan as well as a smuggling route for weapons and narcotics.

A Taliban spokesman, Qari Yousef Ahmadi, said the group was responsible for the Spin Boldak attack. He said the Taliban did not orchestrate the bombing in Lashkar Gah, the provincial capital of Helmand.