A wild police chase in South Carolina ended with a woman getting ejected from her SUV after it flipped multiple times. See the dash cam footage of the incident above.

WBTW reports that Florence County Sheriff’s Office deputies initially tried to pull over 24-year-old Brittany Nicole Jeffords for reckless driving after they spotted her SUV weaving in and out of traffic. After initially refusing to stop, Jeffords eventually pulled over in a parking lot. The dash cam video shows a man stepping out of the passenger side of the SUV and getting handcuffed when the SUV suddenly speeds off again.

In the ensuing high-speed chase, Jeffords speeds through fields, roads and even a trailer park, destroying property along the way. The deputies attempt a PIT maneuver numerous times, to no avail.

“She tore that trailer up right there. The third one. She hit it and knocked steps and all off. She almost hit two little guys standing in the yard,” witness Jenell Dixon told WPDE.

“I saw her coming this way. Down the road right there. And she was literally on two wheels,” Jennifer Durant added.

Eventually, a deputy rams Jeffords’ SUV from behind, causing her to swerve and lose control of the vehicle. The SUV flips numerous times, ejecting Jeffords in the process. At the 4:18 mark in the video, she can be seen laying face down on the road with her feet twitching while the totaled SUV rolls to a stop nearby.

Jeffords was taken to a nearby hospital in serious condition to be treated for non-life-threatening injuries. Several police cruisers were damaged in the chase, but no deputies or bystanders sustained any injuries.

Jeffords’ sister, Jamie, said she didn’t stop for deputies due to an outstanding warrant.

“She didn’t want to go back to jail. She had a warrant out for her arrest for armed robbery,” Jamie said.

Jeffords was eventually released from the hospital and appeared in court last week on multiple charges, including two counts of failure to appear in court, one count of driving with a suspended license and one count of failure to stop for police. 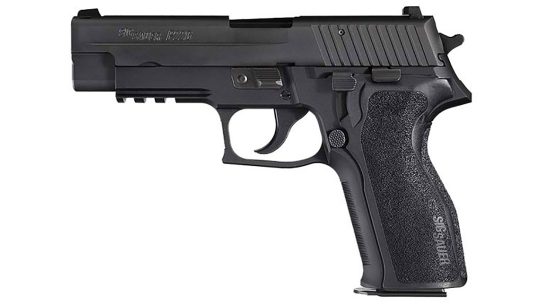 The Franklin County Sheriff’s Office in Columbus, Ohio has picked the SIG P226 and...