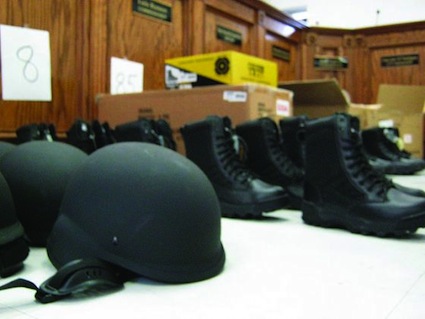 Tactical equipment originally headed to Mexico to outfit members of drug trafficking organizations will now be used in the United States to fight crime.

All of the items the police officers received were from asset forfeitures, San Juan Police Chief Juan Gonzalez said.

Officers received 50 Original SWAT boots, and the 60 helmets were distributed between the police departments of San Juan, Edinburg, Weslaco and the Sheriff’s Department of Jim Wells County.

“My main goal is to find ways to give our officers the tactical edge over the criminal element,” Gonzalez said. “Through grants, seized equipment or skill; anything helps.”

The items had been seized Jan. 16 during a traffic stop in the 2700 block of Fern St. in which San Juan Police, working with Immigrations and Customs Enforcement, pulled over a pewter-colored vehicle that contained the helmets and boots. Soon after, San Juan, ICE and agents with the Bureau of Alcohol Tobacco, Firearms and Explosives searched a house in the area. Inside authorities found more helmets, 659 round of ammunition and 26 high-capacity magazines.

Source: Ildefonso Ortiz for The Monitor.