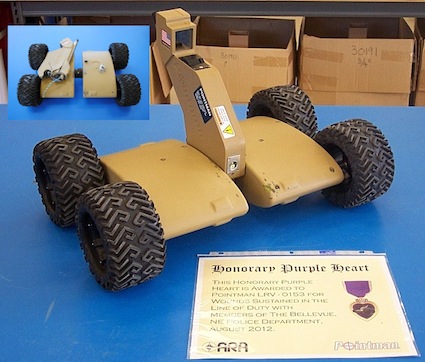 Repairs were completed in less than a month and the robot was shipped back to Bellevue on Thursday, Oct. 11 to resume its SWAT responsibilities.

In a SWAT operation that concluded with the suspect in custody, a Pointman Tactical Robot was struck with four rounds from a 12 gauge shotgun at close range. Prior to being disabled, the Robot was able to monitor a key exitway for multiple hours, plus relay the position and disposition of the suspect to SWAT officers staged further away. Though the robot was disabled after being fired upon, it did survive the event and has been delivered fully repaired to its owners in Bellevue, Neb.

“Had we not deployed the Pointman Robot there is a good chance we would have had SWAT officers much closer to that doorway and possibly in harm’s way,” said Dave Stukenholtz, Criminal Investigations Bureau Commander for Bellevue Police Department.

On the afternoon of Friday, August 10, 2012 officers of the Bellevue, Neb. Police Department responded to a report of an unstable man with a gun. Responding officers approached the house, but retreated and established a perimeter after shots were fired from the home. The SWAT team was then called in. While operating from a neighboring garage the SWAT team navigated their Pointman Tactical Robot into a position inside the suspect’s garage in order to monitor the exitway.

Negotiations continued for several hours. During that period of time, the officer in control of the Pointman viewed the suspect emerging from the garage doorway attempting to close the garage door with his firearm in hand. He then fired four rounds from his 12 gauge shotgun at the Pointman, disabling it. Following that activity, teargas was introduced into the home and the suspect surrendered.

“It did its job,” said Bob Quinn, leader of ARA’s Unmanned and Security Products Division. “Anytime a robot is shot, it’s an example of keeping an officer out of the line of fire. Not only did the robot keep SWAT officers informed of suspect activity, but it’s rugged enough that even after four rounds at close range, it’s fixable and quickly ready to rejoin the team in Nebraska.” 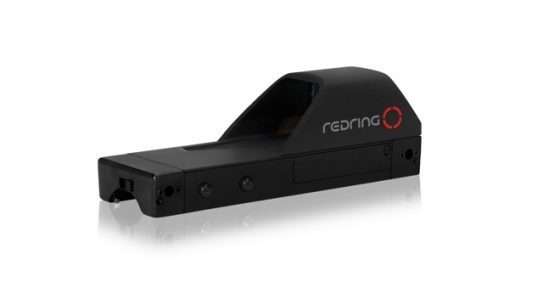