Airman First Class Josh Godin, who is on a six-year assignment to Germany, is set to marry his fiancée Kati McCabe on April 4.

Godin, on a two-week leave, reached out to the Tampa Bay Lightning and decided to surprise his fiancée a few days early.

McCabe was attending the Lightning game Tuesday night at Amalie Arena for a last-season tilt against the Florida Panthers.

During a break in the game, McCabe was selected for a contest to win an autographed stick. All she had to do was name four out of the seven action movie stars shown on the team’s center-ice video board.

After correctly identifying Sylvester Stallone, Arnold Schwarzenegger and Bruce Willis, McCabe was shown a picture of her fiancé. With a rather bewildered look, McCabe said “Josh Gobin” and was told to turn around.

Directly behind her was Gobin, who quickly hugged his soon-t0-be wife in front of a sold-out crowd.

Watch the entire video on Video.Lightning.NHL.com.

Tuesday’s clever ruse was not the first time the Tampa Bay Lightning have helped military members surprise their loved ones.

Master Sgt. Chris McKeen surprised two of his children during the first intermission of a game back in Janurary. 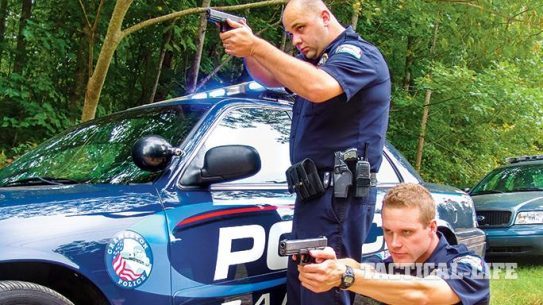 A Look at GLOCK’s Blue Label Program For First Responders

Giving deep price discounts to the first responders who serve in harm’s way!