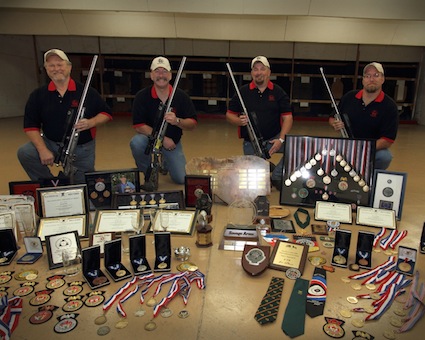 Team Savage started its 2010 season in grand fashion, winning the F T/R National Championship team competition by besting all others in the 600 and 1,000 yard events, and establishing an new 1,000-yard record of 778-21X. That would seem hard to top. But that is exactly what they did at the last two major matches of their season.

Darrell Buell of Damascus, OR; John Weil of Welches, OR; Monte Milanuk of Wenatchee WA and Stan Pate of Milwaukie, OR wrapped up the season with two internationally sanctioned matches: the Canadian International Fullbore Championships held in Chilliwack. B.C. and the Pacific International Fullbore Championships held just outside of Portland, OR. At these matches, elite shooters from around the world compete at 800, 900 and 1,000 yards. The two matches combined constitute a “Super Aggregate”, or continental title.
Team Savage loaded up on the hardware at both matches, winning multiple medals at the various distances. They captured the team gold at the Canadian match and Gold and Silver in the individual Super Aggregate.

The real fireworks happened in the Oregon match. With John Weil leading the way, Team Savage put on a veritable clinic. This competition was held on Weil and Pate’s home range at the Douglass Ridge Rifle Club and they showed everybody that nobody knows how to read the conditions on that range better than Team Savage. Weil won all seven gold medals available, while teammate SPate won six silvers. Milanuk added three bronzes. Weil also shot a new national record at 1000 yards, scoring 148-4x.