In the Women’s Division, Golob’s four match aggregate score of 1907-138X was enough to advance her past second place finisher Helen Jeavons. Golob was the only woman to eclipse a score of 1900, securing her 19th place overall in the Open Division of the competition. In the race for the overall championship title, Koenig was once again in contention to win after placing first in the Practical Event. After two days of intense competition, Bruce Piatt narrowly edged out Koenig for the overall title.

“The Bianchi Cup is one of the most challenging shooting contests in the world and to be a part of the 30th Anniversary of this enduring championship has been amazing for me,” commented Julie Golob. “To be able to compete wearing the Smith & Wesson colors after taking time off to start a family and to come back and win the women’s title in a field of extremely talented women is an accomplishment I will always be very proud of.  The NRA and their dedicated staff of volunteers truly made this event unforgettable and I look forward to competing again next year.”

In other competition, Koenig was named the winner of the Bianchi International Speed Event Shoot Off and Team Smith & Wesson member Annette Aysen earned the High Woman Title during the Ray Chapman Nostalgia Match held earlier in the week before the main competition. 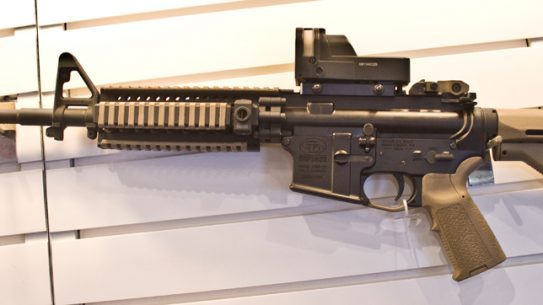