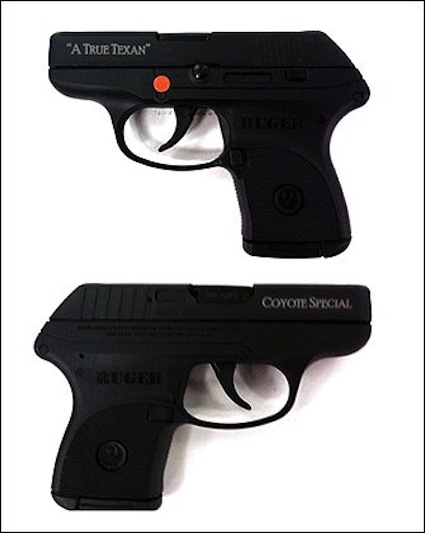 This May 24, 2010, photo provided by Tim McCreary shows a Sturm, Ruger & Co. Inc. limited edition .380 caliber pistol that was inspired by Texas Gov. Rick Perry’s deadly showdown with a varmint last February. The gun has “Coyote Special” written on one side and “A True Texan” on the other. It sells for about $340. A laser site like the one Perry uses will cost about $180 more. The box says the gun is “For Sale to Texans Only.” (AP Photo/Tim McCreary) (AP)

Texas Gov. Rick Perry’s showdown on the jogging trail has spurred a gun maker to sell a “Coyote Special” edition of the weapon he used to take down the varmint. Perry himself has one of the pistols.

The governor shot the coyote that he said was threatening his daughter’s puppy with a Ruger .380-caliber pistol. Manufacturer Sturm, Ruger & Co. Inc. has now come out with a version emblazoned with “Coyote Special” and “A True Texan” on the sides.

On top is a picture of a coyote howling at the moon and five-pointed star of Texas. The box says it is “For Sale to Texans Only.”

“They’re very hot,” in the few weeks they’ve been out, said Joe McBride, owner of McBride’s Guns in Austin. Perry is a frequent shopper there and a photograph of him posing with McBride hangs in the business office.

McBride said he didn’t have specific sales figures, but a salesman said four had been sold before the lunch hour Monday.

“Our governor can outshoot your governor. That’s what I like to tell people from out of state,” said salesman George Gibbons.

Sturm, Ruger & Co. did not immediately have sales or manufacturing figures for the “Coyote Special,” but it appears to have interest from buyers across the state.

“Everybody’s been looking at these and they’ve been selling pretty good,” said Pete Gaona, an employee at Sharp Shooters Knife & Gun in Lubbock.