A Texas police officer used CPR to save the life of an unresponsive three-year-old boy in a KFC parking lot; a harrowing incident captured on dashcam video which can be seen above.

The Fort Worth Star-Telegram says the boy’s father called 911 at around 7 p.m. on the evening of Oct. 12 and told the dispatcher that his son, Brayden, wasn’t breathing.

Officer Chase Miller of the Granbury Police Department responded to the call. His dashcam video, which was posted to the city of Granbury’s official YouTube channel just a few days ago, shows him pulling into the parking lot and encountering Brayden’s sobbing mother, who was carrying the boy in her arms.

Miller placed Brayden on the ground and administered CPR. He then told Brayden’s father how to do it, stepped away to grab a CPR mask, returned and continued pumping, the Star-Telegram says.

After nearly two minutes, Brayden began to breath once again. He was transported to an area hospital, where he made a full recovery.

The woman’s mother, who has been identified as 21-year-old Bethany Hoover by ABC News, said Brayden suffered a febrile seizure due to a cold he’d recently come down with.

Officer Miller was awarded the Granbury Lifesaving Award at a local city council meeting for saving Brayden’s life, ABC News reported. Brayden and his parents were on hand, and Miller gave Brayden several toys, including a toy police dog named Chase, which is Brayden’s favorite character from the television show, Paw Patrol.

“Officer Miller’s exceptional performance reflects great credit upon himself, the Granbury Police Department and the city of Granbury,” police said in a statement. 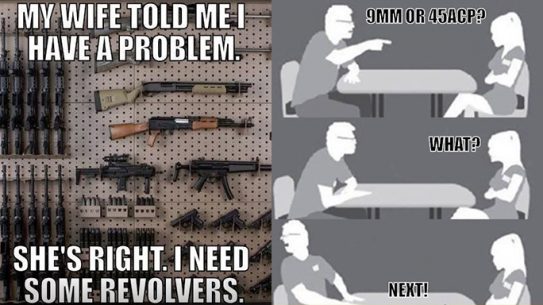 10 of the Best Gun Memes On the Internet

Memes are generally funny and perhaps the most viral thing on the Internet —...