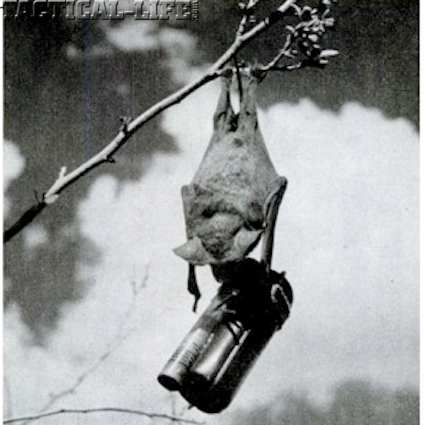 The Mexican free-tail bat is an unlikely warrior, but the Adams Plan was to release millions of them over Japan carrying twice their weight in incendiaries to start fires. (DoD Photo)

Any new idea will have an evolutionary, developmental phase and this inevitably includes humorous incidents, especially when the plan involves using millions of bats to carry incendiaries to the enemy heartland—the American “Bat Bomb” project, AKA “Project X-Ray.”

The idea sounded like it might work as a weapon-deployment system, because, although small, bats can carry more than their weight in cargo; mothers carry their young, and twins are not uncommon. Bats predictably hibernate when the temperature drops and do not require food or care then. They are nocturnal, as their prey is nocturnal; about dawn they find secluded places to hide or hang—above ground—as they must drop to get air in their wings to fly. If buildings are present, they like eaves or open attics. And there are plenty of bats to work with.

Project Inception
The concept of bats as weapon carriers came from dental surgeon Dr. Lytle S. Adams, an acquaintance of Eleanor Roosevelt, who took the idea to Eleanor in January 1942. She took it to Franklin. FDR took it, with written assurance that Adams was no nut, to Colonel Bill Donovan, then the Coordinator of Information, who passed it to the NDRC (National Defense Research Committee), then a diversified skunkworks for the war effort. It was dubbed the “Adams Plan” and work proceeded under NDRC’s Division 19. Not all involved were enthusiastic; the NDRC’s Dr. Stanley Lovell did not speak kindly of the project in his memoirs, calling it “Die Fledermaus Farce.”

NDRC special research assistant Donald R. Griffin critiqued the proposal and noted that, “this proposal seems bizarre and visionary at first glance [but] extensive experience with experimental biology convinces the writer that if executed competently, it would have every chance of success.” He recommended the premise be explored by the Army Air Forces “with all possible speed, accuracy and efficiency.” Bomb development was given to the Chemical Warfare Service, not enthused until officials got a formal memo from USAAF in March 1943.

Nine-Gram Bomber
By then, investigators led by Adams had selected Mexican free-tail bats, based on their availability, hardiness, and load ability of twice their own weight. The 9-gram bats carried 17-gram incendiary devices with aplomb. CWS’ Louis Fieser at Edgewood Arsenal, inventor of napalm, developed a thickened kerosene incendiary carried in a nitrocellulose canister, initiated by a miniature time pencil. It would burn four minutes with a 10-inch flame. An alternate design weighed 22 grams and would burn for six minutes with a 12-inch flame, but was too heavy a load for a wee bat. The incendiary was fixed to the loose skin on the bat’s chest with a surgical clip and string.

Adams’ team first investigated the mastiff bat, North America’s largest flying mammal, with a 22-inch wingspan that could carry a 1-pound stick of dynamite, but they are relatively hard to find. The largest colony of free-tails found during the search was an estimated 20 to 30 million native to the Ney and Bracken limestone caves near Bandera, Texas. As a practical matter, test specimens were collected at the handier Carlsbad Caverns.

One of the various iterations of bomb canisters tried. Deployed at 5,000 ft, its parachute would open at 1,000 feet and release its cargo of incendiary-carrying bats. Although it had promising aspects, there were many problems still to be worked out when the program was scrapped. (DoD Photo)

Holey Cardboard, Batman
In its near-final form, the “Bat Bomb” comprised a perforated cardboard bat carrier similar to a bomb casing, designed with 26 stacked trays, each containing compartments for 40 bats. The carriers would be dropped from 5,000 feet. The trays would separate but remain connected to a parachute that deployed at 1,000 feet. The Blue-Sky Scenario was that 10 B-24 bombers flying from Alaska, each with 100 shells packed with bomb-carrying bats, could release 1,040,000 bat bombs over the industrial cities of Osaka Bay.

As any human endeavor, the project had its “Oops Moments,” with the humor being a given, since the project involved bats. In early May 1943, 3,500 bats were collected at Carlsbad Caverns and flown in the project’s B-25 to Muroc Dry Lake, California. The bats were refrigerated into hibernation. On May 21, five containers of bats were dropped from 5,000 feet, but the bats, still soporific, could not fly and died on impact.

The project was transferred to an auxiliary field under construction at Carlsbad. Drops of the bats were made with dummy bombs from the B-25 and a Piper Cub, but again many of the bats didn’t wake in time to fly, and the cardboard containers didn’t always open. The surgical clips were difficult to attach. While these problems were addressed, more bats were conscripted. Next time, however, they woke up too quickly when released, then escaped, armed, and set fire to a range, barracks and control tower at the new USAAF base. Bats, like chickens, do come home to roost. 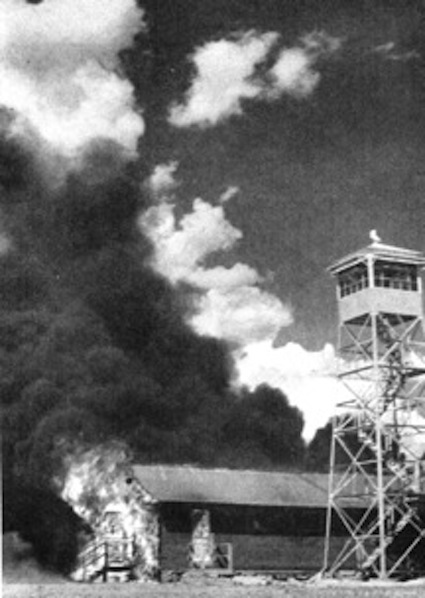 Tests continued, with more than 6,000 bats. A report in June 1943 noted further development should include a better time-delay parachute-type container, new clips, and a simplified time-delay igniter. The report added that “testing was concluded…when a fire destroyed a large portion of the test material”—i.e. the new USAAF facility, fortunately not yet occupied.

Further research was pawned off on the Navy in August 1943, where it became Project X-Ray and was shepherded by the Marine Corps, starting December 1943. The Marines moved operations to MCAS, El Centro, California.

Experiments were carried out with better “egg crate” trays and bomb casings. After experiments and operational tweaks, a fish-or-cut-bait test was carried out on a mockup Japanese city built by CWS in Dugway, Utah.

Thirty fires were started, although 22 did not achieve conflagration. Depending on where you stood, results were encouraging. Dugway’s chief of incendiary testing concluded, “A reasonable number of destructive fires can be started in spite of the extremely small size of the units.”

No Objective Lens
The NDRC observer stated: “It was concluded that X-Ray is an effective weapon.” The Chief Chemist’s report stated that on a weight basis, X-Ray was more effective than the current incendiary bombs: “Expressed in another way, the regular bombs would give probably 167 to 400 fires per bomb load, where X-Ray would give 3,625 to 4,748 fires.”

More-powerful incendiaries were ordered, and full-scale tests planned for August 1944, but the program was cancelled by Fleet Admiral Ernest J. King when he learned it couldn’t be deployed until mid-1945. Some $2 million had been spent on the project. 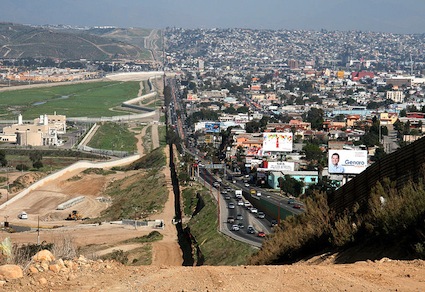 The Mexican free-tail bat is an unlikely warrior, but the Adams Plan was to…