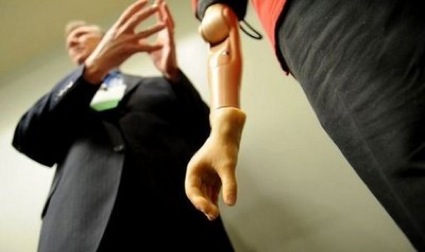 Todd Kuiken (left), Director of the Center for Bionic Medicine and Director of Amputee Services at The Rehabilitation Institute of Chicago, explains the bionic arm on Glen Lehman, a retired sergeant first class in the United States Army. (AFP/Jim Watson)

A bionic prosthetic arm that is controlled by its operator’s thoughts and feels like the amputee’s lost limb went on display at a major US science conference.

More than 50 amputees worldwide, many of them military veterans whose limbs were lost in combat, have received such devices since they were first developed by US doctor Todd Kuiken in 2002.
The arm uses technology called Targeted Muscle Reinervation (TMR), which works by rerouting brain signals from nerves that were severed in the injury to muscles that are working and intact.
“What we do is use the nerves that are still left,” Kuiken said on Thursday. “Muscle becomes the biological amplifier.”

Glen Lehman, a retired US military sergeant who lost his arm in Iraq, demonstrated the latest technology at the annual conference of the American Association for the Advancement of Science in Washington.

“It feels great, if feels intuitive. It is a lot better than the other prosthetic I have now,” said Lehman, whose forearm and elbow were blown off in a Baghdad grenade attack in 2008.

“The other one is still controlled by muscle impulse, you just flex muscle to make it move, it is not intuitive. This arm is more trained to me, whereas the other arm I had to train to it,” he said.
“It does feel like my own hand.”

Lehman demonstrated for reporters how he could pinch his finger and thumb together, lift his forearm and bend his elbow, and turn his wrist just by thinking about those actions.