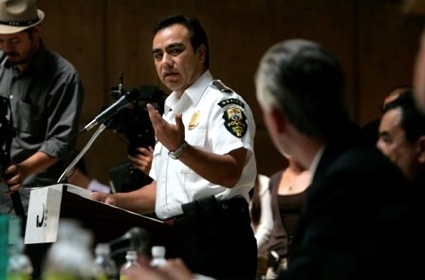 Lt. Col. Julian Leyzaola Perez, Tijuana’s Secretary of Public Safety, was recognized for his efforts Monday at a ceremony at the Tijuana Cultural Center. PHOTO BY PEGGY PEATTIE

“In the past, we didn’t have the level of confidence in the police that we now have,” said Mike Eckel, border liaison officer with the FBI’s San Diego office.

“We work well with him,” said Val Jimenez, special agent with the California Department of Justice and head of the agency’s border liaison unit in San Diego.

The accolades came during a ceremony held at Tijuana’s Cultural Center, the Cecut. Offering applause were Tijuana Mayor Jorge Ramos and dozens of the city’s business and civic leaders.

The honors have come at a time of much uncertainty and behind-the-scenes jockeying over the department’s future leadership: Mayor Ramos’ three-year term ends on Nov. 30, and it is unclear whether the incoming mayor, Carlos Bustamante Anchondo, will keep Leyzaola in the position.

Leyzaola, 50, is a retired army lieutenant colonel who has been with the department since December 2007. He first served as police chief, then a year later was promoted to the department’s top job at a time when drug-related crimes in Tijuana had reached unprecedented levels.

Leyzaola has spearheaded efforts to remove corrupt officers from the department, and earned both enemies and admirers in the process. During his tenure, close to 600 members of the force either resigned or been dismissed from the force; about 200 face criminal charges. Under Leyzaola’s command, 45 officers have been killed in the line of duty, and Leyzaola himself has endured death threats of criminal groups.

Leyzaola has won strong praise from Tijuana’s business community, whose members say the city has grown safer under his command. But Leyzaola has also been criticized by human rights advocates who accuse him of torturing suspects.

Judge: Military contractors can be sued over improper waste disposal.