Yesterday we told you about the first female recruits to graduate from the U.S. Army’s Infantry One Station Unit Training. Continuing on with the theme of women breaking barriers, we’d like to introduce you to the NYPD’s first female counter sniper.

5-foot, 1-inch Det. Tina Guerrero became a NYPD officer soon after the birth of her first child at age 24. Initially working in a vice squad, she wanted something more challenging, so she decided to try and join the department’s vaunted Emergency Service Unit (ESU), an elite group that handles everything from hostage situations to presidential details.

“It’s like a big boy’s playground, and I wanted to play in it. I was welcomed with open arms,” Guerrero told Fox 5. “I’ve always been treated with the utmost respect.”

Part of that respect comes from the fact that she carries her own gear, but it also comes from her ability with a long gun.

“In the beginning, I really was a little intimidated by it,” she said. “I’d never really shot a precision rifle before. And hearing the term ‘counter sniper’ — you’re looked at a little bit of a higher level, and it’s a big responsibility.”

Despite the fact that she’s never had to use her service weapon in the line of duty, she knows it’s vital that she maintains her skills, which is why she and the other members of her ESU team often get in some range time at the NYPD’s Rodman’s Neck training facility in the Bronx.

Guerrero, a mother of three, says she has the full support of her husband—an ESU officer in a different squad—as well as her team members.

“There’s always someone willing to teach you something, always somebody there to answer questions for you,” Guerrero said. “As long as you’re willing to do the job here and go out there and work, you aren’t going to have any problems.”

She told Fox 5 her job as part of the Emergency Service Unit is exciting.

“Being the lead bunker on a search warrant — the first one being able to go through the door — to me is just exciting,” she said. “You don’t know what that unknown is, and what’s going to happen.” 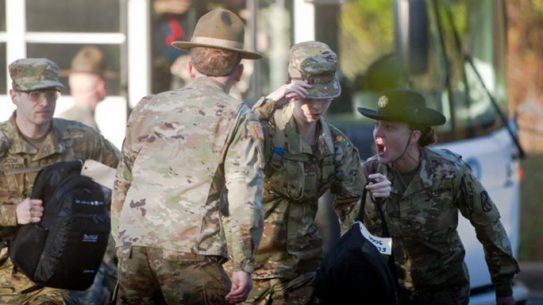 For the first time ever, the US Army has graduated a gender-integrated Infantry One...