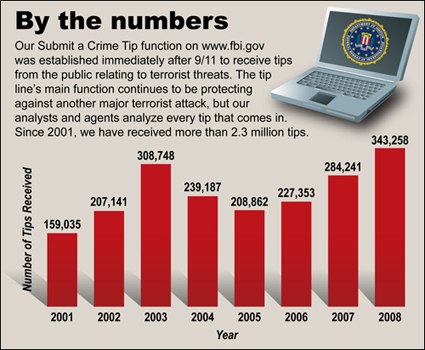 Tip number 2136079 flashed on one of our Submit a Crime Tip computer screens January 12, 2009, eight days before the inauguration of Barack Obama: “I’m going to assassinate the new president of the United States of America,” the message said in all capital letters, followed by hundreds of exclamation marks. And there was a P.S.: “YOU HAVE 48 HOURS TO STOP IT FROM HAPPENING….”

Less than 10 minutes later, there was another message from the same person, who called himself Timothy Ryan Gutierrez. He said he had also rigged 40 pounds of C4 and TNT to seven cars outside the Mall of America in Minnesota.

Bookmark and Share
Even before the second message arrived, our Public Access Center Unit (PACU), one of six units in the Counterterrorism Division’s National Threat Center Section, which administers the global Internet tip line, had swung into action, working to verify the credibility of the threats and then notifying the Secret Service, our Washington Field Office, our Minneapolis Joint Terrorism Task Force, and other law enforcement agencies. Meanwhile, PACU analysts were helping investigators in the field track the identity and location of the person who sent the messages.

Established in the days immediately after 9/11, the Internet tip line has received more than 2 million online tips from the public relating to terrorism, counterintelligence, and criminal matters. Unit Chief Jesse Levine said that the main function of the tip line “is to protect against the next September 11,” but every tip that comes in is seen by two different analysts, carefully vetted, and acted upon if necessary.

In the early morning hours of January 12, the threat against President-elect Obama’s life and the Mall of America submitted by Gutierrez set into motion a whirlwind of activity on the part of the Bureau and our law enforcement partners. In the freezing cold, the vast Mall of America parking lot was swept for bombs. Agents and task force officers from three FBI field offices knocked on doors, trying to determine if Gutierrez was indeed a real person. He was.

In Andrews, Texas, agents found his mother, who said her troubled 21-year-old son was living in Colorado with his brother and working as a welder.

About 12 hours after his e-mail threats arrived on our website, agents knocked on Gutierrez’ door in Cortez. After initially denying it, he finally admitted to sending the e-mails. He also reportedly said, “I didn’t think you would find me so fast.” Gutierrez was later indicted and pleaded guilty to threatening Obama and transmission of threats in interstate commerce to use explosives. His sentencing is scheduled for next month.

Personnel in the unit at Headquarters handle more than 900 tips every day of the week; so far this year, PACU has already received more than 160,000 tips.

It’s not just threats against the president that get attention at PACU, Special Agent Eric Reese, a PACU watch commander, said. “Every piece of information—whether tip or threat—no matter how insignificant it might seem, is carefully scrutinized using all the appropriate open-source and authorized law enforcement data at our disposal.”

That scrutiny requires an around-the-clock operation involving three shifts and about 25 Bureau employees who handle more than 900 tips every day of the week. So far this year, PACU has already received more than 160,000 tips—and each one is considered serious until proven otherwise.

“I think the most important thing for the public to remember is that every single piece of information submitted to the tip line is reviewed by FBI personnel,” Reese said. If you consider the magnitude of 9/11 and the threats that still remain to the homeland, he added, “there is too much at stake to leave anything to chance.”

To share a tip or lead with the FBI, visit our online electronic tip form at www.fbi.gov. 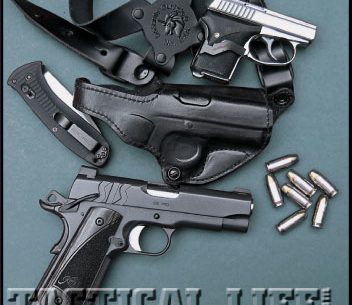 Basics of the Undercover Carry