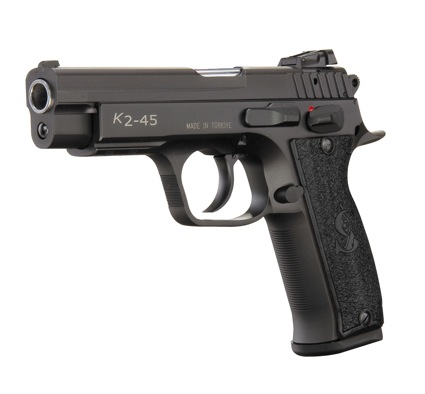 1. EAA/USSG to offer Turkish SAR K2 pistol, SAR shotguns in America.
Built by Sarsilmaz for the Turkish Military, the K2 is truly an amazing gun to shoot. The grip is comfortable, it points well and felt recoil is amazing low for the caliber being used.

3. M855A1 “green” ammo shipped to Afghanistan.
A new round replaces the current M855 5.56mm cartridge that has been used by U.S. troops since the early 1980s. The M855A1 offers a number of significant enhancements: improved hard target capability, increased dependability, consistent performance at all distances, improved accuracy, reduced muzzle flash and a higher velocity.

5. Upgrade kits for Remington M4 XM2010 come in 2011.
The Army expects to field the new sniper rifle, the XM2010, by January. And conversion kits for the M4 rifle will come next year.

6. This is what it’s like to be shot at with an AK-47 (video).
Texas Armoring Corporation (TAC), was tired of customers asking if his company’s bullet-resistant glass in its armored cars actually resisted bullets. So the CEO asked his employee to shoot at him with an AK-47. It’s loud, scary, dangerous, and completely awesome.

9. Marine Corps considers two pistols for new MARSOC .45.
The competition to provide Marine special operators with new .45-caliber semiautomatic pistols is beginning to take shape, with at least three companies submitting samples to the Marine Corps and others bowing out.

10. National concealed-carry bill passes House committee.
In the latest skirmish over guns, House Republicans on Tuesday advanced a bill that would expand the rights of concealed firearms permit-holders, allowing them to carry hidden weapons in any state that issues permits.