KABUL, July 16, 2009 – Patience and time are keys to success in Afghanistan, the commander of NATO and U.S. forces in Afghanistan told reporters here yesterday.

Army Gen. Stanley A. McChrystal discussed his views on what it will take to bring and maintain security in Afghanistan and the importance of helping the Afghans establish governance throughout the provinces.

McChrystal became commander of U.S. and international forces in the country last month at a time of increased violence. President Barack Obama nominated him to replace Army Gen. David McKiernan due to McChrystal’s counterinsurgency success in Iraq and his special operations background.

As NATO’s International Security Assistance Force commander here, McChrystal is expected to be in Afghanistan for around 24 months.

So far, operations are going well, he said. Major coalition offensives have been under way in southern Afghanistan’s Helmand province, as British troops and U.S. Marines try to flush out Taliban forces. The counterinsurgency approach is shape, clear, hold and build, with emphasis on the last two, the general said.

He stressed that the clearing phase lasts longer than people realize, and that the hold and build phase won’t be as effective with security threats looming. Patience and time from everyone involved — security forces and civilians — will be the keys to success.

McChrystal also believes it will take time for the residents, whether in Helmand province or another, to have faith that coalition forces aren’t going to leave a region as soon as the fighting is over and the insurgents are stopped.

“The thing that’s really going to be different here is our commitment to hold and build, so I do not leave an area,” he said. “In my view, it’s the most significant thing.”

McChrystal’s strategy calls for constant presence to ensure the Taliban and other insurgents don’t return to “cleared” areas as they’ve done in the past, he said. Currently, enemy fighters are returning to once-cleared areas and “nipping at the edges with [improvised explosive devices],” he added.

“I think they’re testing the waters to see what will happen and how we’ll react,” McChrystal said. “They’re trying to show that they’re still here.”

Because of the insurgency “testing the waters,” civilian and troop casualties have risen. McChrystal believes the high level of casualties will likely continue until “insurgent fighters decide that they cannot force us out,” he said.

The insurgency’s aggressiveness can be credited to the fact that troops have a greater presence in more areas in Afghanistan, he said. He also noted that 80 percent of casualties are Afghans, most of whom are civilians. Roadside bombs are weapons of terror that eventually will backfire on the Taliban, he said.

“As we saw in Iraq, at a certain point the Iraqi population got disgusted with suicide bombs, and I think that the Afghans will get disgusted by [improvised explosive devices],” he said. “It’s carnage they’re creating on civilians.”

McChrystal said it will take months for ISAF’s strategy to play out in Helmand province, but stressed that the more populated areas will be the priorities as key areas. The lesser-populated areas will be secured with precision raids to keep insurgents under pressure. This will call for a lot of resources and troops, and he noted that success also relies on the Afghan National Army and police development. Governance should follow soon after achieving an upper hand, he said.

“As soon as [insurgents] are on their heels, you’ve got to bring elements that can help facilitate governance,” he said. “Military elements can help do that, civilian capacities can help do that, and [Afghan government] officials can help do that. The sooner you can bring it after the start of an operation, the more I think you send a message to the population that we’re serious.”

Signs of these types of resources are beginning to show. Even before McChrystal was on the ground here, Obama’s administration called for more provincial reconstruction teams with experts in rule of law, governance, agriculture and economics, as well as others.

“It is starting to happen,” he said. “I think that when the civilian uplifts come in from the U.S. side, and a lot of our partner nations are bringing in more [too], we will get more robust over time and get more focused.

“It is the decisive point that the [Afghan government], enabled by us, gets a credible government up and running to the point where the people believe it’s going to stay.”

McChrystal said when villagers and locals realize international forces are going to stick around through the hold and build — governance and development — phase, the situation in Afghanistan really will begin to change. Then Afghans can begin to accept responsibility to govern legitimately.

“In some places you see that’s already in execution,” he said. “[Afghans] are going to have to embrace responsibility for a level of legitimate, credible governance. The standard has got to be one where it is viewed as legitimate at every level.” 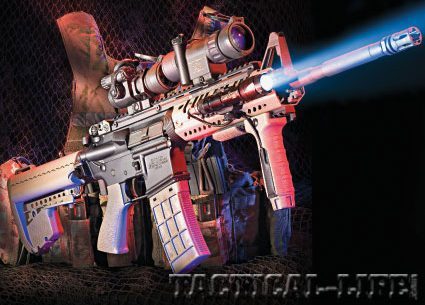