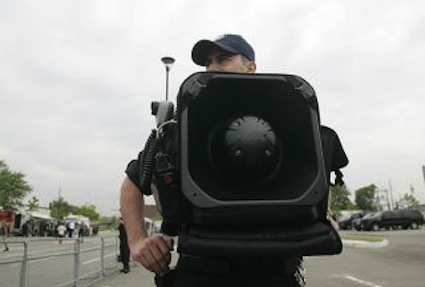 Toronto police have unveiled some of the tools they will be using to assure security during two global summits to be held in Canada this month.

On Thursday security forces gave a demonstration of their arsenal at a police training facility in Toronto allowing the media a first-hand look at how they plan to protect the city and citizens.

According to CBC News, the security plan for the G20 in Toronto and the G8, which will be held in Ontario, has an estimated cost of more than $1 billion, making it the biggest security operation ever in Canada.

During the summits, cameras will monitor public places; the images could later be used in court as evidence of criminal acts, Reuters reports.

The police said there will be numerous motorcades for the VIPs. This will mean lots of traffic police and escort motorcycles. They added that rubber bullets and police dogs will be used when dealing with protesters.

The demonstration also revealed that the police are going to use sound canons, or Long Range Acoustic Devices.

The device emits a blast of sound, up to 140 decibels, that can harm eardrums. This makes opponents of the devices believe they are more of a crowd control device than a means of communication.

The police, however, say that the device will solely be used as a communications tool.