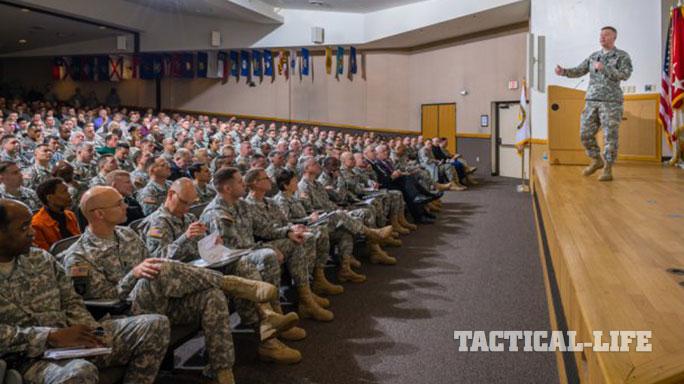 The commanding general of U.S. Army Training and Doctrine Command, or TRADOC, described the Army’s new operating concept, “Win in a Complex World,” as the blueprint for Army forces to operate and accomplish objectives in unknown, unknowable and constantly changing environments.

Gen. David Perkins said Soldiers can’t be trained in a sterile environment under the new operating concept. Perkins made his remarks during a visit to Fort Leonard Wood, Feb. 3.

Perkins’ command, with its headquarters at Fort Eustis, Va., is responsible for Army-wide recruiting, training and development of Soldiers and civilian leaders.

He emphasized training must consist of many complex variables, to include military and civilian aspects.

“Training can’t be just sitting in a classroom with PowerPoint slides,” Perkins said. “We have to replicate and provide all of the friction, the unknowns and things that detract from clarity, so they can use their expertise acquired in training to bring clarity in real situations.”

Perkins said such adaptation is vital, and new doctrine defines the human dimension as the centerpiece of the new concept.

“One asymmetric capability that the U.S. Army has above and beyond everybody else is the quality of our Soldiers — our non-commissioned officers and officers,” Perkins said. “Every Soldier, regardless if he/she is a private out of Advanced Individual Training [AIT] or a general officer, has to be a critical thinker, adaptive and innovative.”

Soldiers will have to know that when they go into a situation, it is going to change; they have to stay ahead of that change, Perkins said.

He said training and developing leaders and synchronization are keys to enabling the Army as part of a joint force to win in a complex world. “At Fort Leonard Wood, it is about the kinds of assignments and education for engineer, chemical and military police officers,” he said.

Perkins said the new operating concept is a sign the Army realizes that the world is only going to get to be a more complex place and credited Fort Leonard Wood as already conducting complex training among the Army’s partners.

Fort Leonard Wood provides a unique capability in that the installation’s training involves multiple branches of services, he said.

“One of the things we have to do in the ‘Win in a Complex World’ is to integrate partners,” he said. “Not only do you have engineers, chemical, and military police, but you have joint forces here,” said Perkins, noting that during his visit he witnessed Marines, Sailors and Airmen along with multi-national partners training on the installation.

“You’re already getting at this complex blend of different partners that you’re trying to integrate,” Perkins said. “You also have the different capabilities that we’re looking at, and you have great facilities.”

“You take the Soldier from basic to AIT or through captain’s career courses,” Perkins said. “As we transition, you keep bringing them back into this environment with multiple partners, domains and challenges. It’s a great capability all in one place.”

The operating concept is a multi-decade process that puts the Army on good footing for the future, Perkins said.

“We clearly have the capability with the quality of Soldiers and leaders we have in the Army and their dedication to the Army and nation,” Perkins said. “They’re going to jump on this, and I have no doubt we will hit this out of the park – pretty much like every mission we give them.” 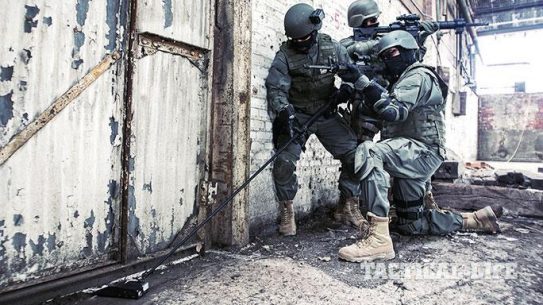 Built to perform every day alongside the men and women of law enforcement, this...