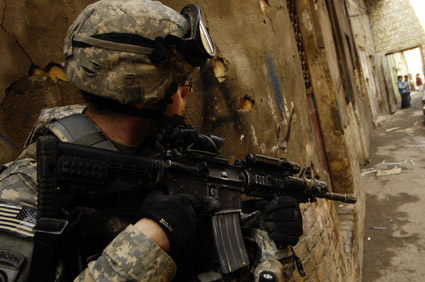 During the operation, troops in the Suwayrah area of the Iraqi capital were searching for a man suspected of organizing paramilitary training for special groups members targeting Iraqi and coalition forces. Reports also indicate he was linked to several senior-level criminal leaders involved in previous strikes on combined forces.

Since Shiite cleric Muqtada al-Sadr pledged in August to suspend offensive operations against coalition forces and Iraqi citizens, military officials have recognized a decline in the number of attacks carried out by special groups members and other insurgents. But some of Sadr’s followers, officials say, continue to betray the cleric’s commitment.

“Muqtada al-Sadr’s cease-fire pledge has helped increase stability,” said Navy Lt. Michael Street, a Multinational Force Iraq spokesman. “We welcome that stability, but we will continue to dismantle the criminal networks of those who choose not to honor that pledge.”

Southwest of Samarra today, coalition forces captured a suspect who allegedly deals improvised explosive devices — deadly homemade bombs — and other weapons on behalf of al Qaeda in Iraq. Military officials believe the suspect also is connected to a local car-bomb factory and several nearby weapons caches.

Reports indicate the suspect is associated with al Qaeda members involved in car-bomb networks, including individuals nabbed last fall for their alleged roles in terrorist attacks and foreign-fighter smuggling.

“Iraqi and coalition forces are committed to ending the terror al Qaeda in Iraq has brought,” said Army Maj. Winfield Danielson, a Multinational Force Iraq spokesman. “Al Qaeda’s war on innocent Iraqi civilians is the result of a twisted and morally bankrupt philosophy that runs contrary to the values of Iraqi citizens. These terrorists are unwelcome in Iraq.”

— Multinational Division Baghdad soldiers detained five suspected terrorists in southern Ghazaliyah. The suspects, believed to be a part of a local IED network, were taken to a coalition forces detention facility for further questioning. The arrests were part of Operation Phantom Phoenix, a countrywide division- and brigade-level strike against al Qaeda and other extremists launched in December.

— Multinational Division Baghdad soldiers captured a suspected special groups cell leader in the Rashid district of the Iraqi capital. Military officials believe the suspect has been involved in attacks against coalition and Iraqi forces involving IEDs, explosively formed penetrators, and small-arms and rocket fire. The arrest came a day after soldiers nabbed a suspected special groups leader in the western Baghdad neighborhood of Hurriya.

In Baghdad yesterday, Iraqi security forces found a house rigged with at least 11 IEDs. The house, located in the Rusafa security district of eastern Baghdad, was armed with 10 IEDs in the courtyard and one at the front door. An explosive ordnance team conducted an explosive breach before investigating further. The team found two doors booby trapped with wire, and discovered an anti-tank mine and three 57 mm rockets.

Discovery of the booby-trapped house came on the heels of two coalition operations Feb. 10, when troops recovered and disposed of weapons caches across Baghdad.