The Tuscon Police Department has released body camera footage of an officer-involved shooting from March 15.

According to police, at 9:37 a.m., the Tuscon Police Department received a 911 call referencing a man with a knife who was threatening construction workers in the neighborhood.

Four officers from Operations Division East responded to the scene and began looking for the suspect, police said. An adult male matching the description was located in the area. The suspect was seen walking down the street with a knife in his hand.

As officers approached and attempted to speak with him, the suspect pulled out a handgun, police said. Moments later, shots were fired and the suspect was struck multiple times.

Officers immediately began rendering first aid to the suspect using their Individual First Aid Kits (IFAK), according to police. The suspect was then transported to a local area hospital and is in stable condition at this time.

No officers were injured during the incident.

Additionally, the Office of Professional Standards is conducting a separate and parallel administrative investigation to examine the actions of department personnel in response to this incident. This is standard protocol in all officer involved shootings.

For more from the Tuscon Police Department, please visit the department’s Facebook page. 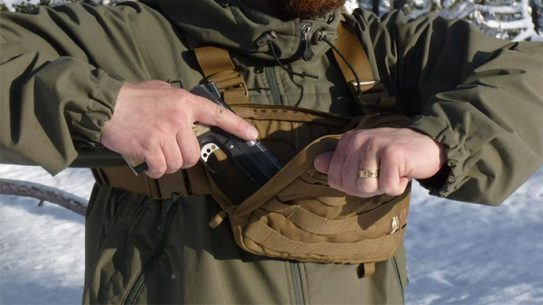 The Recon Kit Bag from Hill People Gear features a PALS grid across the...