It seems military shows are all the rage right now, with no less three set to hit the small screen this fall.

First up is “SEAL Team,” which, according to the official synopsis, is a “military drama that follows the professional and personal lives of the most elite unit of Navy SEALs as they train, plan and execute the most dangerous, high-stakes missions our country can ask of them … Deployed on clandestine missions worldwide at a moment’s notice, and knowing the toll it takes on them and their families, this tight-knit SEAL team displays unwavering patriotism and fearless dedication even in the face of overwhelming odds.”

“SEAL TEAM” stars David Boreanaz of “Bones” fame and is set to premiere on Wednesday, Sept. 27 on CBS. Watch the first look trailer for the show above.

Not to be outdone, NBC is also getting in on the military drama action with a new series called “The Brave.” Here’s the pitch, via the official site:

This fresh, heart-pounding journey into the complex world of America’s elite undercover military heroes follows D.I.A. Deputy Director Patricia Campbell (Anne Heche) and her team of analysts as they wield the world’s most advanced surveillance technology from headquarters in D.C. All the while, Adam Dalton and his heroic Special Ops squad of highly trained undercover specialists use their unbreakable bond and commitment to freedom to save lives of innocent people and execute missions in some of the most dangerous places in the world.

Lastly, The CW is taking a detour from its usual superhero fare with “Valor.” Here’s what you can expect in that one.

The boundaries between military discipline and human desire are tested on a U.S. Army base that houses an elite unit of helicopter pilots trained to perform clandestine international and domestic missions. The drama unfolds in the present as well as in flashbacks to a failed mission involving one of the first female pilots in the unit, ultimately uncovering layers of personal and government/military secrets and leading to a season-long plan to rescue a group of MIA soldiers.

“The Brave” will kick off its first season on Monday, Sept. 25. “Valor” arrives on your television screen on Monday, Oct. 9. Watch the trailers for those military shows below.

We’d be remiss if we didn’t also mention the fact that “SIX,” a SEAL Team Six drama on the History Channel, has been renewed for a second season, which will likely premiere in 2018.

Maybe Hollywood won’t screw these ones up … maybe. Our fallback is just watching reruns of the “GI Joe” animated series. 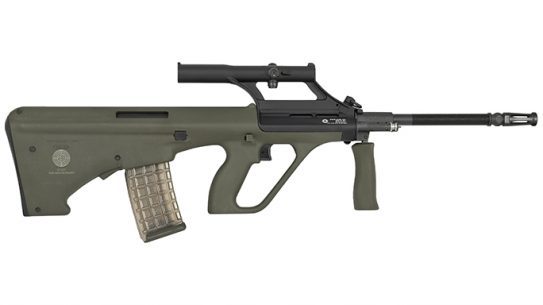 Steyr is going retro with the STG 77 SA, a new limited edition rifle...