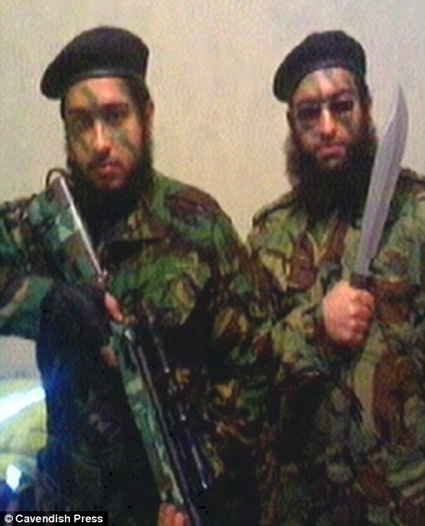 Two brothers who filmed Al Qaeda-style propaganda in a park and dubbed themselves ‘The Blackburn Resistance’ were yesterday convicted of terrorist offenses.
Abbas Iqbal, 24, gathered a stockpile of weapons at the family home in Blackburn, while his brother, Ilyas, 23, studied and compiled information on guerrilla warfare.

A jury at Manchester Crown Court found Abbas Iqbal guilty of dissemination of terrorist publications and preparing for acts of terrorism.

Passing sentence, Judge Andrew Gilbert QC said: ‘You fancied yourself as a fighter for the cause, but the truth is you were a very low-grade one.
‘It would be wrong to pass a long sentence on someone who is obviously more taken with the vanity than the reality.’

During the four-week trial, the jury was shown mobile phone footage off all three men dressed in camouflage and crawling across a town centre park in broad daylight.
One of them appeared to carry a rifle as he rustled through Corporation Park in Blackburn.

The video was among material found on a mobile phone memory card contained in the suitcase of Abbas Iqbal when he was arrested as he attempted to board a flight from Manchester Airport to northern Europe in August 2008.

An alleged extremist, who cannot be named for legal reasons, was in the company of Abbas Iqbal at the airport. Prosecutor Edward Brown QC said the ‘promotional collage’ was intended to radicalize others abroad.

The park video is introduced by a voice stating: ‘They are fighting against oppression, they are The Blackburn Resistance.’ It is accompanied by a background chant which recites: ‘I am the armor for those who believe in the unity of Allah. I am the fire against the aggressor.’