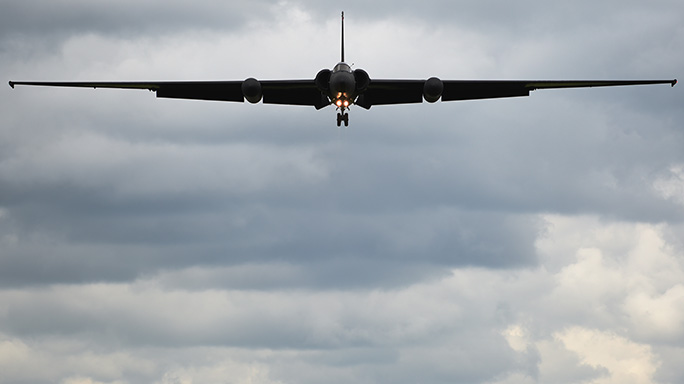 A U-2S from Beale Air Force Base, Calif., prepares to land at Royal Air Force Fairford, England, June 9, 2015. The film "Bridge of Spies" features the U-2, and with the Air Force support, filmmakers were provided access to film the high-altitude, reconnaissance aircraft and gain insights from current U-2 pilots based out of Beale AFB.
(Photo by U.S. Air Force photo/Staff Sgt. Jarad A. Denton)
Comment(s)

The following is a release from the Secretary of the Air Force Public Affairs Command Information:

The Air Force’s intelligence, surveillance and reconnaissance mission areas were highlighted with the release of a major motion picture Oct. 16.

The Air Force Entertainment Liaison Office teamed with movie producers to tell the story of Capt. Francis Gary Powers, an Air Force U-2 pilot who was shot down in 1960 while flying a reconnaissance mission over Soviet Union air space, in the movie “Bridge of Spies.”

ISR is one of the Air Force’s five enduring core missions and is integral to global vigilance for the nation — it’s foundational to global reach and global power.

“The film ‘Bridge of Spies’ features the U-2 aircraft, and with the United States Air Force support, filmmakers were provided access to film the high-altitude, reconnaissance aircraft and gain insights from current U-2 pilots based out of Beale Air Force Base in California,” said Secretary of the Air Force Deborah Lee James.

The U-2 Dragon Lady is an important part of the Air Force’s ISR enterprise, and provides high-altitude, all-weather surveillance and reconnaissance in direct support of U.S. and allied forces. It delivers critical imagery and signals intelligence to decision makers throughout all phases of conflict, including peacetime indications and warnings, low-intensity conflict, and large-scale hostilities.

“The Air Force agreed, with the Department of Defense, to participate in the motion picture ‘Bridge of Spies’ because it was an opportunity to highlight history and showcase Airmen to worldwide audiences,” said Develyn Watson, the Secretary of the Air Force Public Affairs Entertainment Liaison deputy director.

The Los Angeles-based entertainment liaison office falls under the public affairs career field, and is entertainment industry’s primary contact for access to Air Force personnel and equipment. In addition to coordinating shoots on Air Force bases, the office also reviews television, movie and video game content for accuracy when DOD support is authorized. Past movie projects include the first two “Iron Man” films, “Terminator Salvation” and the first three Transformer films, including “Transformers: Revenge of the Fallen.”

“Filmmakers were provided access to and filmed an actual U-2; relied on the expertise of current U-2 pilots; and gained insights from Air Force historians,” Watson said. “These interactions afforded the visual effects crew and production team with the ability to recreate scenes that added to the realism and authenticity of the film.

“This collaborative effort between the filmmakers and the Air Force provided a level of production value that would not have been achieved without the Air Force and DOD cooperation.”

The U-2’s feature brings attention to the aircraft, and the importance of its mission today. The Air Force ISR enterprise provides actionable intelligence from multiple sources — including platforms, sensors, people and databases — to national decision makers, combatant commanders and tactical level personnel.

“It’s the top combatant commander requirement and will remain so for the foreseeable future — balancing capabilities across the range of military operations remains a top priority as ISR experts deliver decision advantage to commanders at all levels,” said Lt. Gen. Robert Otto, the ISR deputy chief of staff. “As we transition to what will likely be a highly volatile, unpredictable future, Air Force ISR will be the bedrock upon which the service provides freedom of action to our joint and coalition partners.” 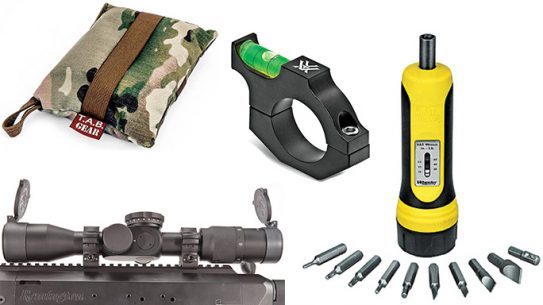 7 Ways To Soup Up Your Remington Model 700

While the Remington Model 700 base rifle is plenty impressive, there are some add-ons...