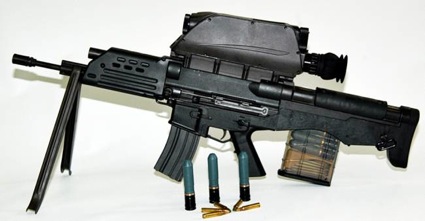 The emirates placed the order for 40 K11 infantry rifles during the Special Operations Forces Exhibition Conference 2010 earlier this month in Jordan.

“Once a final contract is signed, it will be the first export sale of the K11, possibly making it one of the country’s major export items together with the T-50 supersonic trainer jet and K2 Black Panther main battle tank,” said a statement from the defense acquisition program.

A final signing of the contract is expected by July and the unit price per rifle is estimated at $14,000.

The rifle is developed by the Agency for Defense Development and S&T Daewoo. It has been in operational use by the South Korean army for more than a year.

The weapon consists of a semiautomatic 20mm smart grenade launcher, an underslung assault carbine firing a 5.56mm NATO round, a top-mounted computer-assisted sighting system with integrated laser rangefinder and thermal infrared night vision capabilities, according to the developers.

Operating in the same manner as the XM-29, the South Korean weapon has 20mm and 25mm “smart shells” that use a computer-controlled fuse. Under a self-detonation system, the 20mm round can track its target and explode several feet above it. It is also capable of puncturing concrete walls.

An earlier U.S.-made model proved to have several flaws, including its weight of about 18 pounds and its inability to put enemy troops out of action. The U.S. rival rifle is also an estimated 25 percent more expensive than the South Korean make.