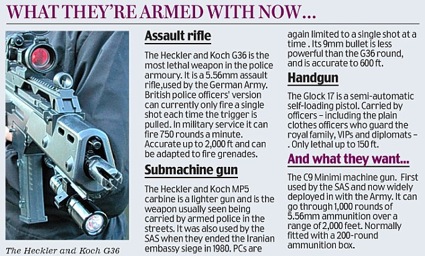 Police officers must be armed with even more powerful weapons to deal with a Mumbai-style terrorist attack in the UK, a top officer said last night.

Scotland Yard Assistant Commissioner John Yates said officers needed a huge boost to their firepower to combat an atrocity where the aim is to kill as many innocents as possible in a matter of minutes.

His comments reflect grave concerns that Britain may not be able to cope with a copy-cat attack and suggest moves toward the greater use of ‘heavy ballistic weapons’ including rapid-fire assault rifles and C9 Minimi machine guns, as used by the SAS, as well as more powerful bullets.

Security sources have also told the Home Office that, unless police are backed, summoning the Army to take on fanatics could be the only alternative option in the event of an attack.

A security source said: ‘If two terrorists go on the rampage with machine guns, we have got a massive problem.
‘The question is whether there should be a policing or military response. There needs to be a debate and John Yates is right to put the issue in the public arena.’

Islamic-extremist terrorists killed 173 people over three days in Mumbai in coordinated shootings and bombings in November 2008.

Gunmen armed with AK-47 assault rifles and backpacks filled with ammunition and grenades arrived by dinghy and fanned out to the city’s railway station, a popular cafe and the Oberoi Trident hotel and Taj Mahal Hotel.

In extraordinary scenes, commandos fought room-to-room battles with the terrorists who had taken hostages in the hotels.
But special forces took ten hours to arrive and many policemen were left fighting the heavily-armed terrorists with only bolt-action rifles.

In the aftermath of the bloodbath, senior British police officers and counter-terrorism officials have held talks with the Home Office on how to prepare for a similar atrocity.