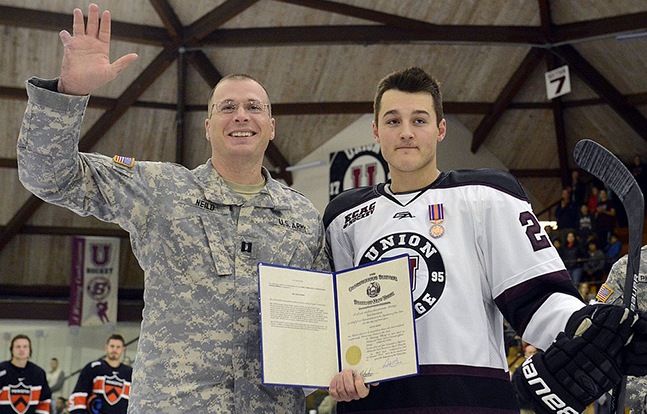 Kevin Shier is more than just a player on one of the best college hockey teams in the country — the freshman forward is also a hero.

Shier met with New York Army National Guard Capt. Timothy Neild Saturday prior to his game against Princeton. The significance is that Shier saved Neild from his burning pickup truck last December on the New York State Thruway, according to The Daily Gazette.

Shier and his father, Rick, of Toronto, had stopped in Syracuse the night of Dec. 8 to get some rest before heading to Union for a visit. Shortly after getting on the Thruway, they came upon the accident. Shier helped another man pull Neild from the truck after another man cut the seat belt — moments before the truck exploded. At the time, Shier was playing for an Ontario Junior Hockey League team and would later commit to Union College.

Neild walked slowly to center ice Saturday to pin the New York Conspicuous Service Medal onto Shier’s jersey. The medal is the second highest honor presented by the New York Army National Guard, after the Medal of Valor. Then, he joined Shier in dropping the puck.

“I wouldn’t be here today — or at all — had Kevin Shier not done what he did,” Neild said. “… He’s an incredible young man, and I look forward to seeing his games in the future. I’m a Union hockey fan now and will be for life.” 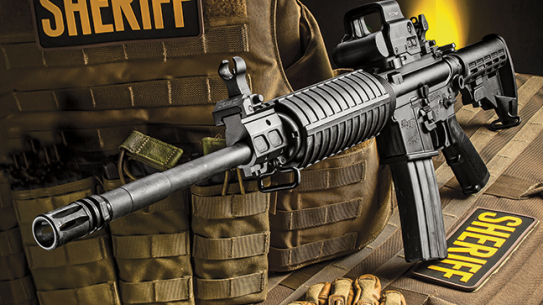 The Sig Sauer M400 SRP carbine in 5.56mm is built for maximum reliability!