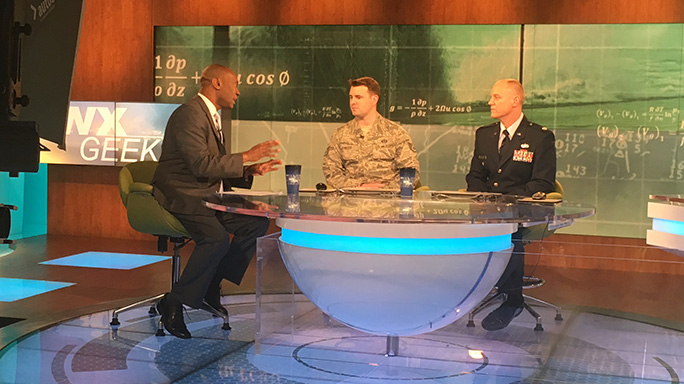 Dr. Marshall Shepherd, host of the Weather Channel’s "Weather Geeks" show, interviews Staff Sgt. Trevor Reiss, a weather forecaster assigned to the 21st Operational Weather Squadron, and Lt. Col. James Weaver, the deputy commander of the 2nd Weather Group, Feb. 25, 2016, at the Weather Channel studio in Atlanta. Weaver and Reiss were invited to star on the show and discuss the unique mission of the 557th Weather Wing, formerly known as the Air Force Weather Agency, and describe what the daily job is like as a forecaster supporting military operations.
(Photo by U.S. Air Force photo/1st Lt. Carrie Volpe)
Comment(s)

For some Airmen, being called a weather geek is a term of endearment.

Two Airmen from the 557th Weather Wing recently embraced their inner geek and will share their passion and expertise on an upcoming episode of “Weather Geeks” on the Weather Channel.

Weather Geeks broadcasts weekly and is hosted by Dr. Marshall Shepherd, a University of Georgia professor and 2013 president of the American Meteorological Society.

Weaver and Reiss traveled to the Weather Channel’s production studio in Atlanta on Feb. 25 to answer questions about the unique mission of the 557th WW and the roles and responsibilities of an Air Force meteorologist.

As a weather officer with 19 years of experience, in addition to bachelor’s and master’s degrees in meteorology, Weaver was fielded to answer questions and discuss the career field from a leadership perspective. Weather officers provide critical oversight and expertise across the range of Air Force weather operations, all while leading flights and squadrons of weather personnel.

“It was a once-in-a-lifetime opportunity,” Weaver said. “This was my first experience being interviewed for a television show and was made all the more unique and special because it’s a show I currently watch and enjoy. The interview provided an outstanding platform to inform the American public about the 557th Weather Wing, its mission and people. I’m honored to represent the more than 1,500 active-duty, reservists and civilians who work so hard to accomplish the mission every day.”

Reiss, who has been in the Air Force since September 2010 and graduated from the Weather Apprentice Course at Keesler Air Force Base in Mississippi, offered a junior enlisted perspective. The enlisted force within the 557th WW directly supports their customers’ needs by analyzing data, drawing hazards charts, briefing pilots, creating forecasts and more.

“I was excited to just have a chance to tell our story,” Reiss said. “A lot of people don’t know that the Air Force has a weather department. The Air Force takes citizens and transforms them into operational forecasters. Not only are we looking at the weather and putting together all the scientific processes, but we’re then transforming this information to relevant products for our customers.”

When the Weather Geeks producers reached out to the Air Force with an invitation to showcase weather Airmen, leadership from the 557th WW selected Weaver and Reiss to participate, and they both jumped at the opportunity.

“We wanted to shed light on the importance and often overlooked role of the military weather forecasters,” said Mike Chesterfield, the “Weather Geeks” executive producer. “The professionalism and the enthusiasm the Airmen have for their jobs was on full display. We were thrilled to host the team and we are certain that the perspective that they provided will not only be informative but will be fascinating for our audience.”

After a tour of the Weather Channel facility, weather lab and production studio, Weaver and Reiss sat down with Sheppard and discussed what exactly an Air Force weather forecaster does.

“The 557th is the Air Force’s only weather wing, and we provide specialized airpower on behalf of the American people for the Air Force, Department of Defense, joint warfighters and our coalition partners and allies,” Weaver said. “You won’t find a more dedicated and professional group of Airmen in the Air Force.”

Reiss explained that the underlying meaning of being a weather geek is having a passion for meteorology and learning the science of Mother Nature.

Although the fundamentals of being a meteorologist are fairly standard, Air Force meteorologists and weather technicians are quite different than what the general public typically expects from meteorologists on television; the biggest difference being the customers they support.

Missions can fail and lives may be lost if commanders are not provided with timely and accurate forecasts and overall weather situational awareness, Weaver said. Members of the 557th WW, headquartered at Offutt AFB, Nebraska, provide aircrews with very detailed aviation forecasts, issue watches and warnings and produce airfield forecasts for more than 534 locations, protecting over a million Airmen, Soldiers, family members and $1 trillion in DOD assets around the world. 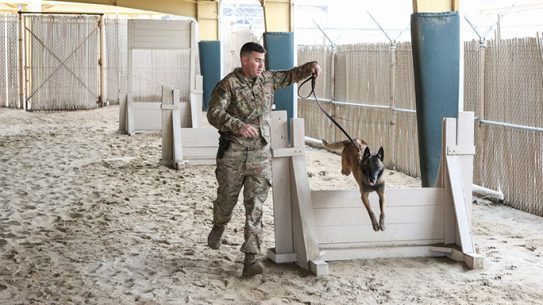 Handlers and K9s at the Qatar-based Camp As Sayliyah continue to improve field skills...