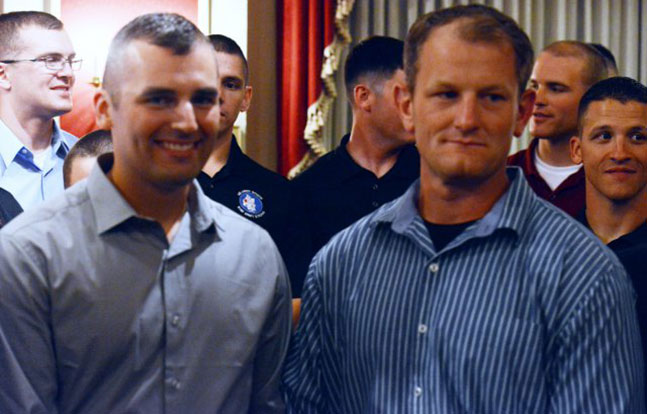 The Best Warrior competition concluded Oct. 9 and the winners were:

The Army excelled at keeping the competition a mystery, Carpenter said, and this was a special compliment coming from a Special Forces Soldier proficient in Military Information Support Operations. None of the graders gave so much as a clue throughout the week’s events, he said.

Although his training keeps him in top-notch shape, Carpenter said the Chemical, Biological, Radiological and Nuclear portion of the exercise was the most difficult, because he had to perform first aid and carry a wounded patient, all while wearing cumbersome CBRN gear.

Fortunately, he said the weather was cool enough to keep him going.

The weapons portion was his favorite, shooting and assembling the M-4 carbine and Squad Automatic Weapon, as well as the live-fire portion. He also liked land navigation, which he said was “a relaxing stroll in the woods.”

Asked after his win why he joined the Army, he replied with a blush that he needed to pay back his student loans.

His advice to aspiring Best Warriors: study hard, get into shape and represent your unit well.

Like Carpenter, Boyd is in a military occupational specialty where keeping secrets is important. He said he couldn’t disclose which languages he learned as a linguist, but admitted that his British accent came from living in London for much of his life. His dad is a U.K. citizen, and his mother American.

Boyd had dual citizenship but renounced his U.K. citizenship to get his top-secret clearance. However, he still has a lot of friends in the U.K., where he earned his master’s degree in War Studies at Kings College in London.

He too said his win was a big surprise and it hasn’t sunk in yet.

One thing that Boyd admitted was that as a cryptologic linguist, the job involves a lot of desk work. The physical aspect, he said, is just as important to Soldiers and he hopes to instill that discipline in his Soldiers; albeit in a persuasive and friendly manner.

Army Chief of Staff Gen. Ray Odierno and Sgt. Maj. of the Army Raymond F. Chandler III arrived here Thursday, to view the events and speak with the Soldiers.

“You’ll run into tough problems wherever you go,” Odierno told a non-commissioned officer competitor. “You’ve got to figure out how to solve it, and we depend on you to do that. I know it took a lot of work to get here.

“You’re representing a lot of non-commissioned officers here,” he continued, “so I really, truly appreciate the great leadership you’ve shown and the great effort you’ve put into this.”

Odierno then spoke to the entire group of 28 during a break in the competition.

“To be non-commissioned officers and good Soldiers, it’s about that mix of the physical and the mental,” he said. “You’ve got to be physically fit. You’ve got to be mentally capable of making decisions, especially when you’re getting tired. Part of this is to stress yourself physically and thinking through problems while under that stress.

“Being non-commissioned officers in the future is about taking on challenges. We’re going to continue putting you in places where significant challenges exist,” he continued. “It’s about overcoming those and overcoming unknown and figuring out the right solutions. That’s the kind of leaders we want; adaptable leaders who can think on their feet, who can accomplish tasks you might not be prepared to do and might not have seen before, but now have to figure out.”

Retired Command Sgt. Maj. Bennie Adkins, who received the Medal of Honor for valor during the Vietnam War, visited the Best Warrior competitors while they were out in the field testing.

“I was impressed with the quality of the Soldiers that I’d seen,” he said, adding that he wants to continue to be an ambassador for the Army and the U.S. military, and having received the Medal of Honor recently, there are a lot more requests for appearances and speaking engagements than he previously had.

Adkins was the guest speaker at the awards ceremony, where he recounted some of his exploits, including the incident where a tiger saved his life during a firefight in the jungles of South Vietnam. “I love cats to this day,” he added. The tiger scared away North Vietnamese forces who had his small band of warriors surrounded and overwhelmed.

Sgt. 1st Class Jason Manella, last year’s winner of the Best Warrior competition, said it was an honor to meet Adkins just prior to the awards ceremony, Oct. 9.

Like Adkins, Manella said he’s been busy with appearances and speaking engagements. The highlight of the past year, he noted, was parachuting from a French aircraft during the June D-Day 70th anniversary of the landings. He and the French soldiers landed on Normandy beach. He also got to jump with the British in England.

Manella, who is in the Army Reserve, said he’s helped mentor one of the Reserve Soldiers who’s competing this year.

While he is happy to mentor and help others, he remarked that he has gotten a lot of help himself from Army and Veterans Affairs health care providers, who assisted him through a traumatic brain injury and recovery.

Besides continuing to represent the Army as the 2013 Best Warrior, Manella said he hopes to inspire others with traumatic brain injury to overcome the stigma by coming forward and asking for help. 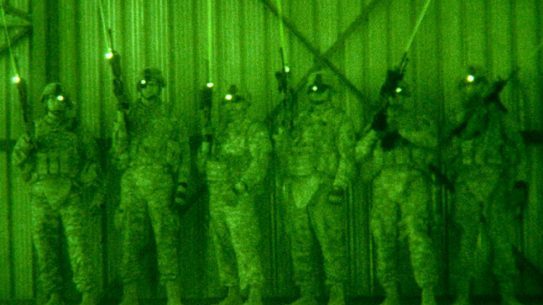