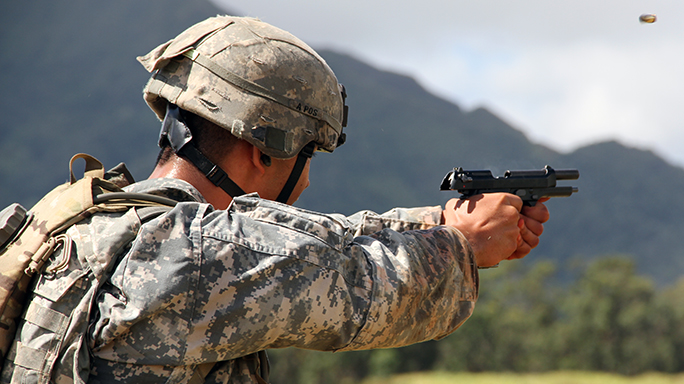 The Army named the new weapon the “XM17” Modular Handgun System. It will replace the current M9 standard Army handgun with a more state-of-the-art weapon system.

Federal procurement restrictions do not allow the disclosure of the names of firms participating, she said.

The government presented changes to its latest draft solicitation for the XM17, which were posted to the Federal Business Opportunities website, June 8.

Among changes discussed at the industry day was policy that now opens up the competition to rounds other than ball (full metal jacket) ammunition.

A representative from the Army Judge Advocate General’s Office discussed the decision in detail during the event.

Richard Jackson, special assistant to the U.S. Army Judge Advocate General for Law of War, told attendees that federal, state, local and military law enforcement elements routinely use expanding and fragmenting ammunition in their handguns due to the increased capability it provides against threats.

“Expanding the XM17 Modular Handgun competition to include special-purpose ammunition will provide the warfighter with a more accurate and lethal handgun,” Jackson said. “Other types of ammunition allow the XM17 Modular Handgun System to be optimized by vendors, providing a more capable system to warfighters across the spectrum of shooter experience and skill level.”

Through the upcoming competition, the Army intends to replace the M9 with a more modern handgun system.

“Handgun technology has advanced significantly thanks to lighter-weight materials, ergonomics and accessory rails since 1986, when the M9 entered the Army’s inventory,” Dawson said. “The Army is seeking a handgun system that outperforms the current M9 system. It also must be modular, meaning it allows adjustments to fit all hand sizes.”

The Army is encouraging industry to optimize commercially available gun, ammunition and magazine components to provide a system for maximum performance.

Current plans call for the Army to purchase more than 280,000 of the new handguns from a single vendor. Deliveries are scheduled to begin in 2018.

The Army also plans to buy approximately 7,000 compact versions of the new handgun.

Dawson said that other military services, participating in the XM17 program, may order an additional 212,000 systems above the Army quantity.

The draft solicitation spells out likely procedural and schedule details that responding vendors will have to follow to participate in the competition. 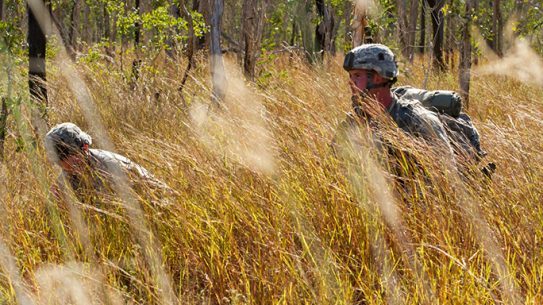 Talisman Sabre is a biennial exercise that brings nearly 30,000 US and Australian military...