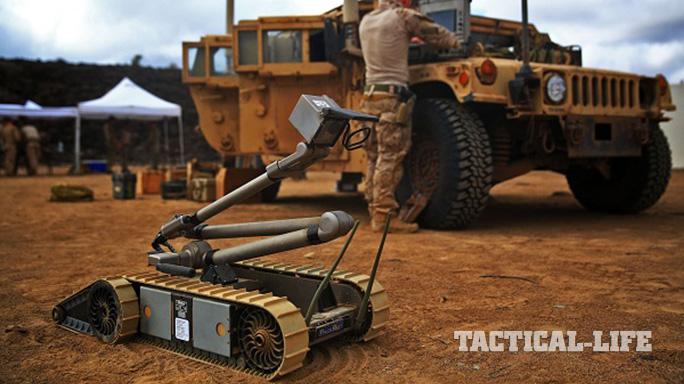 “Established and emerging robotics programs of record will be fielded in the 2019 to 2024” timeframe, he said, before describing some of those possible programs.

The robotics include autonomous and semi-autonomous systems used to clear mines, provide surveillance, convoy supplies and acquire targets, among many other things.

While ground-based, semi-autonomous systems such as mine-clearing proliferated during the last decade of war, these systems are a hodgepodge of nonstandard, non-interchangeable system parts, many of which have not yet made the transition into programs of record, he said. They were hurriedly built for the immediate need to save Soldiers’ lives.

Today, these disparate systems have become a “sustainment burden” to the Army, since they are not built into a program of record, he said, and were acquired through overseas contingency operations funding.

It’s Davis’ job – along with that of all the Soldiers doing the testing and other work – to help sort through which platforms will be used going forward and what will be riding on them since he is responsible for executive management of development, systems integration, acquisition, testing, fielding, sustainment and improvement of some 350 diverse combat support and combat service support systems.

Robotics technology is rapidly evolving, Davis said. The standard requirements and acquisition process is three to seven years. Under that schedule, odds are the system would become obsolete even before fielding or even before it reaches initial operational capability.

Once small quantities of the robotics system are evaluated, they will be expedited for validation, prioritization and funding through the G-3/5/7, Davis said. REP is now funded to do this.

Twice a year, a council of colonels will meet to review battle lab test results to see if capabilities of new systems or components pan out, he said. If green lighted, they could become requirements.

Since this NDIA event was primarily for industry reps, Davis provided the current Army posture on acquisition.

He ticked off stuff the Army covets: incremental hardware and software enhancements to existing systems/chassis; sensor and payload upgrades; modularity; open architecture in IOP, or, in- and out-processing software; standardization; miniaturization and light weight; and, intelligent behavior.

As for intelligent behavior, Davis said, think bird dog – a small ground robot that can see, smell, hear and fetch. It would also have to be simple enough for a Soldier to use, as his cognitive focus would need to be on mission, not the tooling for that mission.

“This area is ripe for industry-government engagement,” he told the reps.

He then opened the floor to questions.

One industry rep said it would likely take the Army at least 30 years to develop a fully autonomous ground vehicle since off-road terrain can be very complex.

Davis agreed with the complexity of the problem, but was more optimistic, predicting that in possibly 10 years, there would be a rudimentary system that could recognize markings or patterns, especially in open terrain.

The roadmap to autonomous, he said, begins with semi-autonomous, including collision avoidance and lane keeping, and thereafter proceeds incrementally. It’s just as much about getting the trust of the users – the Soldiers – as well as the confidence of the testing community.

Davis then very lightly touched on some of the robotics systems his people are evaluating.

The Man-Transportable Robotics System Mark II (explosives ordnance disposal) will use an existing platform, controller and base software. Focus will be on developing a number of mission-specific payloads. The Mark II is bridging to a program of record, he said.

The Husky Mounted Detection System will have a deep detection system added to its current ground-penetrating radar, Davis said. A road-clearance integration system will also be added.

The Route Clearance and Interrogation System will be used at the squad level to transport gear and augment convoys in semi-autonomous mode, he said. It will also have digging capability and some other functions.

The Common Robotic System Individual is being designed to be carried by Soldiers. As such, he said, it has to be light, not to exceed 25 pounds. Notionally, 15 pounds will be for the platform itself, five for the controller and five for the payload. “He’s a small guy but very versatile,” Davis said.

During the last 10 years, the Army purchased more than 7,000 “nonstandard equipment,” items such as Talon IV, Packbot 510 FASTAC, SUGV 310 mini-EOD, Dragon Runner and First Look. The Army is now sorting through the heap working to identify possible programs of record and “nesting bridging strategies in how we get there,” he said.

This nonstandard equipment is unusual, he said, in that it does not follow a normal program of record’s trail from develop, procure and provision it and then have the U.S. Army Training and Doctrine Command schoolhouse take on all program of instruction for operators and maintainers.

The ad hoc purchases resulted in the unusual step of nonstandard equipment being maintained and supported at the Selfridge Air National Guard Base, so these systems bypassed normal protocol, Davis said.

The Squad Multipurpose Equipment Transport will be semi-autonomous and autonomously operated, Davis said. The Maneuver Center of Excellence has been interested in it for some time because it’s a key enabler for lightening the dismounted infantry Soldier’s load.

Different versions are expected to be delivered, a large one that can haul half a ton, a 600-pound hauler and a smaller one. One prototype resembles a small horse. It is in capability development doctrine staffing, he said. 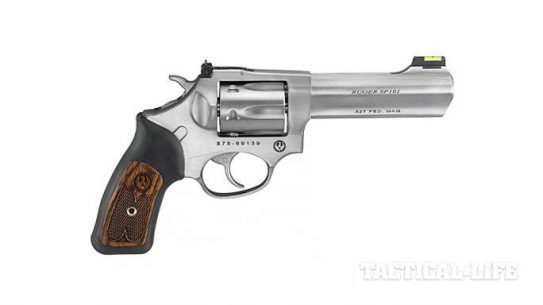 The Ruger SP101 in .327 Federal Magnum features a light-gathering front sight, and a...