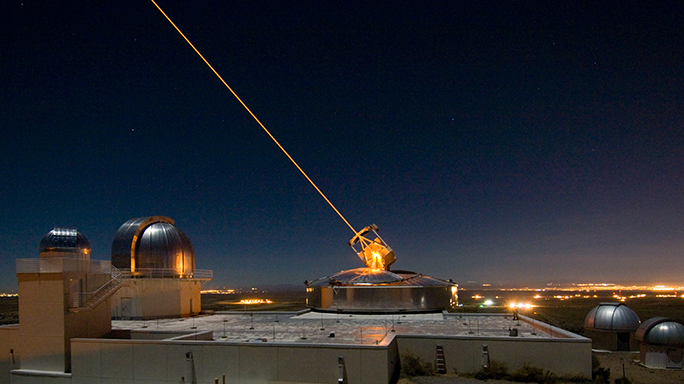 The Sodium Guidestar at the Air Force Research Laboratory's Starfire Optical Range resides on a 6,240 foot hilltop at Kirtland AFB, N.M. The Army and Navy is developing its own laser weapons systems.
(Photo by Air Force photo)
Comment(s)

Responding to lawmakers’ questions about how close the Army is to developing offensive and defensive directed-energy weapons, Mary J. Miller responded: “I believe we’re very close.”

Miller, deputy assistant secretary of the Army for Research and Technology, and other experts testified before the House Armed Services Committee’s Subcommittee on Emerging Threats and Capabilities, Feb. 24. Miller’s topic was the Army’s Science and Technology, or S&T, Program for fiscal year 2017.

The Army’s S&T effort is committed to pursuing high-energy lasers, she said. That effort has been used in an analysis of alternatives for the Indirect Fire Protection Capability program of record.

Now, that effort has been “aligned to transition into a program of record in the fiscal 2023 timeframe,” she said. It’s already planned and funded.

“Why that long?” she asked rhetorically.

Because it’s being done in a “step-wise demonstration of capability,” she said. “We have to make sure the lasers work and do the full set of scopes against the threats we project. And those threats include the counter-rockets, counter-artillery and counter-mortar as well as [Unmanned Aerial Vehicle] and cruise missile threats.”

Miller explained that the Army wants to understand the lasers’ full capabilities “before we offer it to a Soldier.”

Operators need to trust what lasers can do, she added.

“Lasers have been promised for a long time, but they’ve never held up and delivered what was asked for, so the operators are rightfully skeptical,” she pointed out. That’s why the Army is taking lasers out into operational environments and testing them.

In the meantime, “there will be steps along the way where we spin off lesser capable laser systems that can do good things on smaller platforms. Those will come out soon,” she concluded.

“We too have spun off lesser-capable laser systems,” he said, following Miller’s remarks.

The Air Force is flying every day with lasers under its transport aircraft, using them as infrared countermeasure system,” so we too spun off lesser-capable laser systems and as we get larger power outputs and better thermal management out of smaller package lasers, we will build those powers into defensive to offensive capability as well,” Walker said.

Walker also said the Air Force is working with Special Operations Command to develop an offensive laser that will be fitted to AFSOC AC-130 gunships. Part of that technology, he said, includes “beam-steering and power and thermal management.”

A lawmaker asked if the services are duplicating efforts.

That office “serves as a clearing house and center of coordination across all the service departments to ensure each of our investments are aligned and not duplicative and are building on each other in each of our domains and service-unique issues,” he explained. “We coordinate very well,” he added, terming the effort part of the “third offset strategy.”

A lawmaker then asked Welby what the third offset means.

He explained that laser programs are just a small part of the third offset, which is the Defense Department’s endeavor to dominate the battlefield of the future with “asymmetric advantages.” Other offset strategies include unmanned and autonomous systems and cognitive warfare, he added.

The first two offsets involved Cold War efforts targeting the Soviet Union, the first being tactical nuclear weapons developed in the 1950s and precision weapons in the 1970s, he explained. 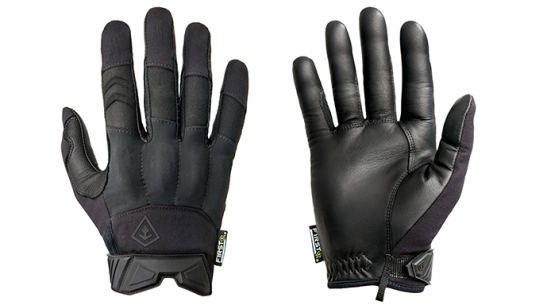 The all new Hard Knuckle Glove from First Tactical features an isolated and hidden...