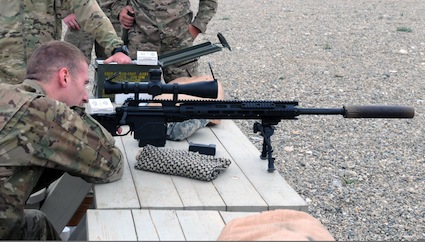 The Army is moving closer to arming all of its sharpshooters with the XM2010 Enhanced Sniper Rifle, a powerful new sniper rifle that can reach more than 50 percent farther than the weapon currently in use.

The new rifle takes some of the parts of the current Remington-built M24 bolt-action sniper rifle — which has been in the Army’s inventory since the late 1980s — and marries them with an updated stock, magazine and rail system.

But in a major shift brought on by experience in Afghanistan, the XM2010 is being built to fire the .300 Winchester Magnum round, which can hit targets up to 1,200 meters away. The current M24 — much the same as the civilian Remington Model 700 — fires a 7.62mm round that can reach targets about 800 meters away.

“We’re trying to reach those extended ranges in Afghanistan … so [snipers] can reach out and hold that enemy out farther,” said Brig. Gen. Pete Fuller in an April 14 interview with military reporters.

Fuller went on to say that the success of the XM2010 in Afghanistan caused the Army to consider fielding the longer-range rifle to all snipers servicewide.

“There is ongoing discussion in the Army right now whether we are going to ‘pure fleet’ the whole Army with this capability,” Fuller said.

“I believe the Army will go in that direction” but a final decision hasn’t been made, he said.

The Army will continue to procure the semi-auto M110 sniper rifle for shorter ranges and urban engagements, officials say.

In September, the Army signed a contract with Remington Arms to “rebuild” about 250 M24s into the XM2010 rifle for use in Afghanistan. The contract left open the possibility that the service could buy up to 3,600 rifles if it received the funds.

The Army was concerned that the M24 fell short in typical engagement ranges in Afghanistan, where Taliban fighters tend to ambush U.S. troops from high-altitude escarpments just beyond the lethal range of current Soldier arms.

The bolt-action XM2010 includes a five-round magazine, an adjustable, folding stock and enough rail space to accommodate a variety of optics, designators and illumination tools, the Army says.

According to Army weapons buyers, the original program was spearheaded by Rep. Mike Arcuri, a Democrat congressman whose district includes the Remington Ilion Firearms plant near Utica. Arcuri was defeated by Republican Richard Hanna last year.

“The Army has about 2,500 M24s in its inventory so there is enough headroom in the current contract to provide all sniper teams an XM2010 capability if the Army ultimately approves the decision and allocates the budget to do so,” a PM Soldier weapons representative said in a statement.

© Copyright 2011 Military.com. All rights reserved. This material may not be published, broadcast, rewritten or redistributed.