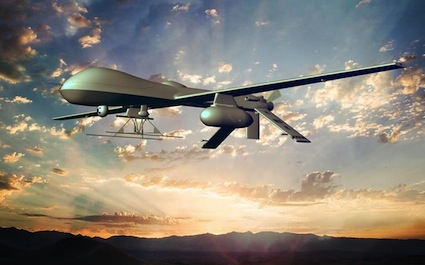 Lockheed Martin has begun testing the TRACER penetrating SAR radar on the NASA Ikahana UAV, a modified General Atomics MQ-9 unmanned aircraft. The radar depicted in this drawing employs the latger UHF antenna carried on the right wing. The unpressurized radar pod is carried on the left wing. The radar is slated to begin operational evaluation in 2011. Image: Lockheed Martin.

By the end of 2010 Lockheed Martin is expected to deliver the last of four radars ordered under the U.S. Army contract. One of the four systems will be deployed for operational evaluation. Pending positive results of the evaluation, Lockheed Martin could enter low-rate production under a new contract.

The TRACER radar can spot targets under camouflage or buried underground objects. The initial operational application of the radar would be on a manned aircraft such as C-12, designed to perform automated, wide area surveillance detecting changes in the scene being inspected. TRACER will be able to deliver high resolution images to ground units in all-weather, day or night conditions, when operating in various collection modes. “When deployed, this ‘hunting’ sensor can use the penetrating rafar capability to provide ground commanders with intelligence not available from a traditional optical sensor” said Jim Quinn, vice president with Lockheed Martin’s Information Systems & Global Solutions-Defense.

The purpose of the current test flights is to demonstrate the system’s ability to operate the radar remotely on long endurance missions. The TRACER configuration aboard the MQ-9 utilizes an external unpressurized pod to house the RF subsystem with antennae installed on the other wing. The tests aboard the NASA-operated Ikhana is currently underway. The Ikhana performed as a surrogate for the Army’s “Gray Eagle” (MQ-1) unmanned aerial system, which was not available because of current mission critical needs. According to the manufacturer, the flight tests on the Ikhana focused on the radar’s performance in the harsh environment of the unpressurized pod, and are intended to mitigate risk for eventual installation on the Army UAS.

TRACER was developed as a dual-band system, enabling effective ground and foliage penetration using UHF and VHF frequencies. The compact UHF antenna has been integrated on the unmanned aircraft while the VHF antenna began flying on a surrogate manned platform in October 2010. Packing the antenna into more compact module is already underway, matching medium size platforms such as the C-12, Predator and Gray Eagle UAVs.