The U.S. Customs and Border Protection agency said the tunnel ran between warehouses in Otay Mesa, California, and Tijuana, Mexico. It measured 1,800 feet and was equipped with a rail system, lighting and ventilation.

Agents recovered more than 25 metric tons of marijuana in seizures related to the investigation in both California and Mexico and arrested a U.S. citizen and his Mexican wife.

The couple were stopped at a Border Patrol checkpoint in Southern California, driving a semi trailer loaded with ten metric tons of pot. The truck had earlier left the warehouse, which agents had under surveillance.

“This wasn’t a mom-and-pop operation, or in this case a husband and wife operation. This is clearly organized crime at work. This was the cartels,” said John Morton, director of the U.S. Immigration and Customs Enforcement agency.

Mexico is in the grip of a raging drug war that has killed more than 30,000 people south of the border since December 2006, when President Felipe Calderon launched a crackdown on powerful drug gangs.

Mexican cartels have bored scores of tunnels under the U.S.-Mexico border in recent years to beat ramped-up security at ports of entry and the rugged spaces in between. Nearly all of them linked cities on either side of Mexico’s border with California and Arizona.

Investigators said the tunnel is about waist high and was fitted with rails and a pulley system that they suspect was used to ferry drugs under the border in a cart. It had been in operation for less than a month.

In early 2006, agents discovered a tunnel measuring 2,400 feet running under the same stretch of the border to Otay Mesa from Tijuana. It remains the longest such tunnel discovered to date. 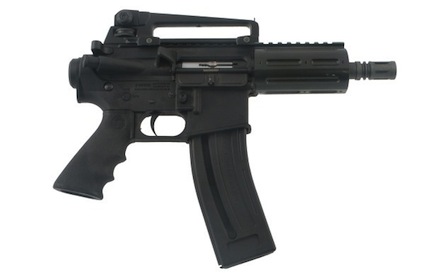