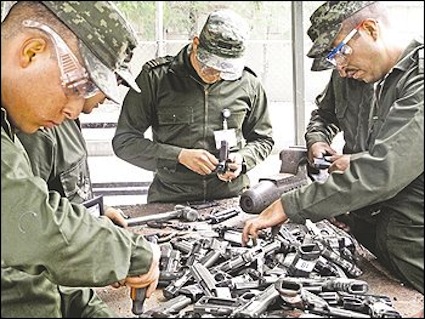 MEXICO CITY, MEXICO – AUGUST 1: Mexican military destroys firearms seized from criminal organizations and drug cartels in Mexico City, Mexico on August 1, 2010. Many of the weapons are smuggled into Mexico from the United States. Guns confiscated in crimes are stored at a military base in Mexico City and then disabled. The government has seized more than 80,000 weapons in last four years. (Photo by William Booth/The Washington Post)

In Mexico City efforts to stem the smuggling of weapons from the United States to Mexican drug cartels have been frustrated by bureaucratic infighting, a lack of training and the delayed delivery of a computer program to Mexico, according to U.S. and Mexican officials.

In the past four years, Mexico has submitted information about more than 74,000 guns seized south of the border that the government suspects were smuggled from the United States. But much of the data is so incomplete as to be useless and has not helped authorities bust the gunrunners who supply the Mexican mafias with their vast armories, officials said.

According to U.S. agents working here, Mexican prosecutors have not made a single major arms trafficking case.

In an address before a joint session of Congress this year, President Felipe Calderon asked the United States to reimpose a ban on the assault-style rifles favored by Mexican drug cartels and to work harder to stop weapons flowing from gun shops and shows along the southwest border into Mexico.

Obama administration officials have responded with a surge in spending to the Bureau of Alcohol, Tobacco, Firearms and Explosives and the Department of Homeland Security, and promises to curb cross-border gunrunning.

“Mexico is facing an unprecedented and a terrible struggle” against arms traffickers, money launderers and organized crime, Mexico Attorney General Arturo Chavez said Tuesday, standing beside U.S. ambassador Carlos Pascual. “We have to fight these criminals together. Positive results have been attained, but we need to do more and move faster.” 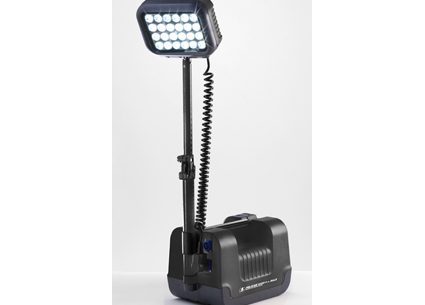